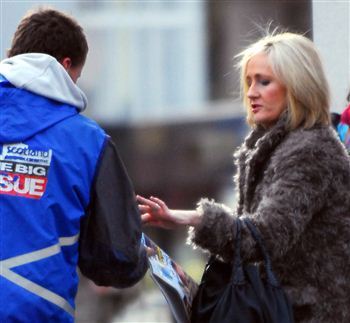 HARRY Potter books are the most nicked from Scotland’s libraries.

New figures reveal JK Rowling is not only the country’s top seller, but also the top stolen.

But Scots tax payers are footing the bill, which amounted to £223,463 last year.

In extreme cases, debt recovery agencies have been called in by some councils to tackle the mounting costs.

Experts say the resale value of library books is low, so amnesties have been arranged by some councils, while others are forced to write the books off from their stock.

Figures obtained under the Freedom of Information act show that in the past year, 36,792 books have never been returned to libraries across Scotland, some 5,476 more than the year before.

One council even claimed the rising theft was a good thing, as it showed how popular books have become.

Not surprisingly, the books most popular with thieves, or which were borrowed and not returned, match the year’s best-sellers list.

West Lothian council are missing more books than any other council.

They are currently searching for £51,218 of library stock, and are about to deploy a debt recovery agency to tackle the problem.

“Any guides to how to pass your driving test are very attractive to thieves.

“Customers who don’t bring books back just seem to be too lazy to come back to the library.

“In the past we asked our van drivers to call in on households who had not returned library stock, but we are now about to send these accounts to a debt recovery agency, and add a recovery fee to the total owed.”

Tracing the unreturned books is harder than it sounds, according to Elaine Duffy of Aberdeenshire council.

She said: “On occasion an amnesty is run over the course of a week that means that all overdue charges are waived.

“This will hopefully encourage customers to return items they would normally be charged for.”

Edinburgh City Libraries manager Martin Hinds said library members are “vigorously pursued” for the return of library material, pointing out that it is public property.

He said: “We send people reminders and take other steps to deter theft, but if someone’s going to steal then we can take action.

“If theft is particularly blatant they may be taken to court, but this is only in extreme circumstances.

“On a positive note, the fact the number of unreturned books has increased could be seen as a reflection of how popular books have become.”

But book thefts “aren’t a problem” for one council; Eilean Siar in the Western Isles.

They lend 13,400 books to locals every month and have only lost 30 this year – all of which they expect to get back.

She said: “Books go overdue for a variety of reasons but most are eventually returned.

“Out of a total stock of 87,500 items in the main library in Stornoway, so we don’t appear to have a problem with theft of stock.

“If books are stolen, as opposed to not being returned, they tend to be reference books.

“We did lose, some years ago, Jane’s Fighting Ships; the Guinness Book of Records has also disappeared on occasion.

“We are currently missing a volume of the Proceedings of the Society of Antiquaries from the Reference section; but we have some expectation that it may mysteriously re-appear on the shelf!”

1. JK Rowling – Harry Potter and the Chamber of Secrets

10. Agatha Christie – And Then There Were None