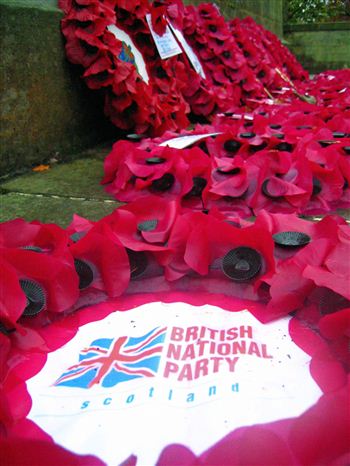 THE British National Party sparked outrage by leaving a wreath at a Scottish war memorial.

Politicians slammed the far-right party as “racist bigots,” saying they should have been banned from attending Sunday’s remembrance for the war dead.

But the party insist they will continue to lay wreaths – emblazoned with the party’s logo – at memorials cross the country.

The row erupted after the BNP left an unofficial wreath alongside others at Dunfermline Abbey’s commemorative plinth.

Fife MSP Jim Tolson said the BNP were simply trying to promote themselves, rather than pay their respects to those who fought and died in the world wars.

He said: “This is an insult to the people that laid down their lives for the freedom these racist bigots want to use to publicise their views.

The city’s MP Willie Rennie was at the ceremony, and said he hoped the anti-white and anti-gay party never returns.

He said: “They’re horrendous. I just hope they listen to people’s opposition, reflect and decide not to take part ever again.

“I find them a repugnant party that shouldn’t have a place in British politics.”

Despite not being invited to Sunday’s remembrance, the BNP could not be turned away, according to the local Royal British Legion branch.

Vice-president Tom Fraser said: “No approach was made to us by the BNP but I doubt we could really turn anyone away.

“As long as nobody desecrates or makes a protest we can’t really comment.

“As far as I’m concerned we genuinely welcome anyone who wants to pay their respects and lay a wreath if they wish.”

Anti-fascist magazine Searchlight say people across Britain have objected to the BNP showing up at remembrance ceremonies.

Editor Gerry Cable said: “It’s totally hypocritical that people who peddle the ideas of Hitler’s Third Reich should be anywhere near a war memorial.

“We’re getting calls from all over the country from people complaining where they have been laying wreaths.

“They seem to forget that World War Two was fought against fascism so it is totally out of order.”

He said: “We’ve been laying wreaths across the country and we’ll continue to do so to pay respect to the fallen.

“Many of the members and people that laid wreaths in places like Dunfermline are ex-servicemen or their families.

“We never contacted anyone about this and we didn’t do it for political gain but the MP has publicised it.”