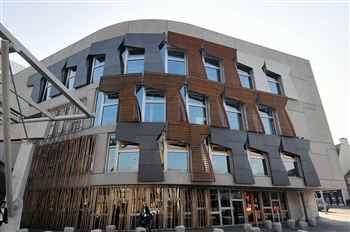 The virus was discovered in a tank serving hundreds of staff and ministers’ offices at Holyrood last June.

But bungling staff kept news of the highly infectious disease secret until Christmas, despite it being found in the same block as offices belonging to the presiding officer Alex Fergusson and Parly building boss Paul Grice.

They didn’t tell anyone about the risks of a pneumonia-like outbreak until last week when the details were slipped inside a meeting of Holyrood’s housekeeping committee, the Scottish Parliamentary Corporate Body, which few MSPs actually attend.

He said: “The fact this outbreak appears to have been minor does not explain or excuse the lack of transparency.

“How does it look for the Scottish Parliament to demand the highest standards from others whilst, at the very same time, concealing from its own staff an outbreak of Legionnaires’ disease within its own boundaries?

“Many will unfortunately conclude that this is another example of the Scottish Parliament not practicing what it is so keen to preach.”

It is not known how long the bacteria existed in the system before being found, but it is likely to have thrived in the warm summer.

A report from facilities manager Stewart Gilfillan revealed the bug – which can lead to fatal flu-like symptoms – was found during routine tests in Queensberry House, the 17th Century mansion at the heart of the Holyrood complex.

The bug was found in three areas including the ministers’ showers.

Initial efforts to tackle the problem, by flushing pipes with disinfectant, failed to budge the resilient bug until its source tank was identified.

A Parliament spokesperson said: “We are satisfied that the measures taken ensured the risk was controllable at all times.”