‘Tartan Tat’ Drives Out Kiltmaker To The Stars 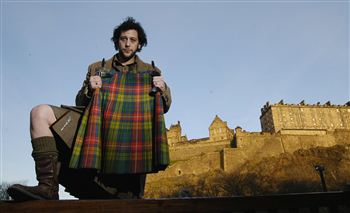 SCOTLAND’S kiltmaker to the stars has decided to set up his own business – because Edinburgh’s world-famous Royal Mile is over-run with ‘tartan tat’.

Howie Nicholsby – who has designed exclusive kilts for superstars Robbie Williams, KT Tunstall and Vin Diesel – has admitted he is leaving his family’s famous kiltmaking business because of the growing trend for “all kinds of junk”.

The 21st Century Kiltmaker is also breaking away from his father’s firm because he says trying to sell his funky new kilts alongside his father’s more traditional tartan fare is “a bit like selling Porches next to a horse and cart”.

Geoffrey (Tailor) Kiltmakers has been involved in a long-running dispute with the Singh family, who run the Gold Brothers chain.

The feud came to a head in 2007 when Geoffrey Nicholsby was involved in a much-publicised heated argument with the brothers over customers.

Howie said: “The whole business with the Gold Brothers has been a factor for me moving from the Royal Mile.

“There has never been any kind of restrictions put in place by the council on what kind of businesses operate there, and people have been allowed to get away with selling all kinds of junk and loud music.”

Howie is now all set to open a new showroom in the city’s New Town which will also be available for catwalk shows and corporate events. 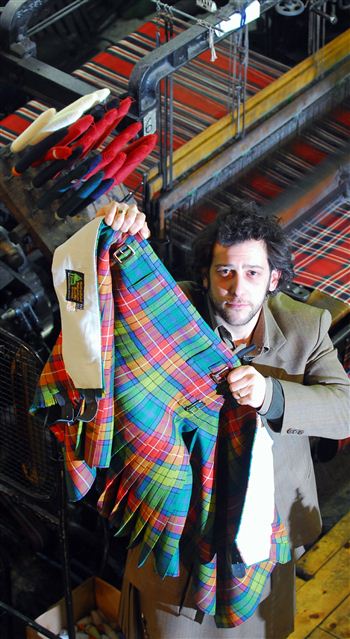 And the tartan entrepreneur has also spoken of his “amicable split” with his father after more than ten years working together.

Geoffrey (Tailor) Kiltmakers was first set up in 1971 by Geoffrey and his wife Lorna and has gone on to become one of the country’s leading kiltmaking firms.

Son Howie joined the family business in 1998, and a year later launched his own trendy 21st Century Kilts at the London Fashion Week.

Howie said: “What I do is very different to my mum and dad’s business selling traditional kilts.

“Selling 21st Century Kilts alongside them is like trying to sell a Porsche alongside a horse and cart.”

Mr Nicholsby senior said: “Howie felt the time was right to do his own thing. It’s very much an amicable split.”

No-one from the Gold Brothers empire – which currently has 12 shops – was available fro comment.

Tom Buchanan, economic development leader at Edinburgh City Council, said: “I’m sorry to hear Howie Nicholsby is critical of the council over the Royal Mile and the way it has developed.”

The contemporary kiltmaker is also backing the campaign to create a tartan for newly-appointed US president Barack Obama.

Mr Obama’s maternal ancestor, Edward FitzRandolph, was said to have emigrated to America from Scotland in the 17th Century.

Howie said: “We know millions of Americans have what they call ‘Scots-Irish’ heritage and millions more claim to have it.

“An Obama tartan would reach out to these groups but would also appeal beyond them to Americans with little or no knowledge of Scotland.”