The secret beneath a Scotsman’s kilt 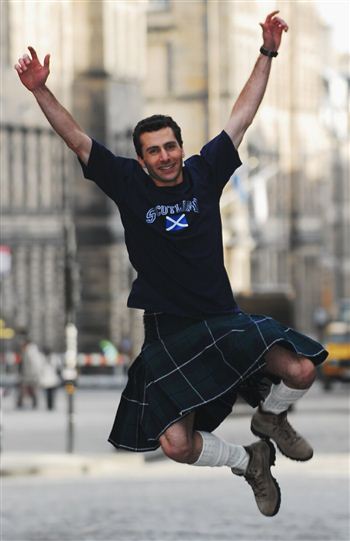 SCOTSMEN are being urged to break tradition and wear pants under their kilts – for hygiene purposes.

One of the country’s leading kiltmakers, Slanj, is imposing a pants-on policy for anyone renting the Highland dress.

But the move provoked anger among purists, who say it will “break women’s hearts.”

The firm has decked out superstars of the kilt-wearing world’s superstars, including Sir Sean Connery, Billy Connolly, Ewan McGregor and Alex Kapranos of Franz Ferdinand.

“Going commando” has been a Scottish tradition for generations since the country’s soldiers were banned from wearing underpants.

But the Slanj store outlines its new policy in a rhyme on posters in their stores.

It reads: “Though the Scots like to prance about in their kilts wearing nae pants, fir the next punter make it fair; dinnae figit tae wear a pair.”

He said: “People were hiring kilts to wear at weddings, parties and football and rugby matches.

“It doesn’t require a huge leap of imagination to picture what kind of states they would come back in.

“Because of this and potential hygiene problems we are politely asking people to wear underwear.

“We accept some people will be opposed, but I’m sure they would change their minds if they were forced to clean kilts on a Monday morning.”

In a bid to cash-in on the kilt cover up, Slanj is aiming to make a roaring trade in leopard print and tartan boxer shorts made especially for being worn under kilts.

“In 21st Century Scotland, there is absolutely no shame in wearing pants under your kilt.

“The idea that somehow wearing nothing makes you more of a true Scotsman is a myth.”

But there’s more chance of Jimmy Hill getting voted into Holyrood than Scotsmen donning y-fronts under their kilts, according to football fanatic Iain Emerson.

The Famous Tartan Army Magazine editor said: “Scots have proudly gone commando at great victories from Bannockburn in 1314 to Wembley in 1977 and that is not going to change now.

“The Tartan Army are about as likely to stop being true Scotsmen as they are to vote Jimmy Hill in as First Minister.

“Our unique national dress makes us popular all over the world and the idea of wearing pants under kilts would shatter illusions and break women’s hearts.”

One Scot always proudly wearing a flash of tartan is Tory MSP Jamie McGrigor, who successfully lobbied Holyrood for the introduction of a Scottish Tartan Register.

He said: “I think most people wear pants under their kilts these days and I, for one, certainly do.

“Given the freezing weather we’ve been having recently, you’d be unwise to do otherwise if you want to keep your credentials in working order.

“I used to have a pair of tartan shorts, which were ideal for when I was burling round on the dancefloor, but sadly I don’t think I could fit into them anymore.”