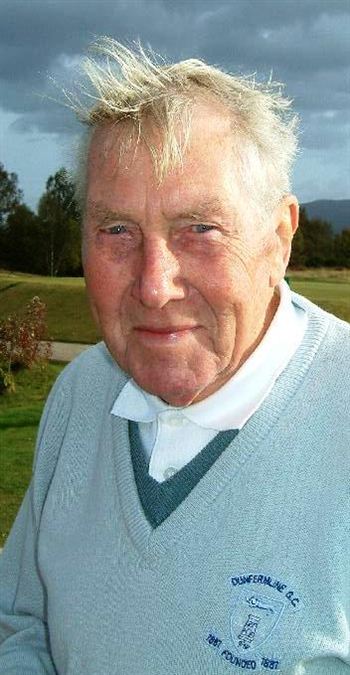 A SCOTS golfer who was famous for bagging over 25 holes-in-one has died at the age of 98.

Tom Galloway, from Crossford in Fife, the oldest competitive golfer in the country had hit his 25th ace on the golf course at the age of 92.

The former brewery manager only took up the sport as a hobby when he retired in the early 1970s after looking for a pastime to keep him fit.

As a youngster, the sports-mad pensioner had been scouted by both Arsenal and Tottenham Hotspur as a potential goalkeeper.

Spurs were said to be close to completing his signature but were thwarted by the outbreak of WWII.

Tom succumbed to cancer after a short illness at his daughter Isabel’s home in Limekilns, Fife on February 19.

After retiring from his managerial position with Maclachlan’s Castle Brewery in Edinburgh, the granddad-of-one decided to take some golf lessons and soon became hooked.

Proving a total natural on the greens and down the fairways, the oldest swinger in town hit his first hole-in-one with in a few weeks of first picking up a club.

And since then, the lifelong teetotaler struck aces with amazing regularity.

The former-RAF man achieved his first ace at the Braid Hills course in Edinburgh before he had even been awarded a handicap.

Within a year he had managed to secure a handicap of nine – and after another year of practice that figure had plummeted to just four.

He was still playing off single figures well into his 80s.

In his later years Tom played off 13, but was quick to point out that score was rounded up from 12.5.

Daughter Isabella, 68, said: “My dad was such a character and was playing golf and joking about right up until a couple of months ago.

“He had taken a night class in golf instruction when he retired and never looked back. He was most at home when he was on that course.

“After my mother died he started to play two rounds a day, and sometimes three if the weather was good.

“He was a lovely man and I feel proud to be known in the area as Tom Galloway’s daughter.”

Tom loved travelling all over the country in his beloved Rover to compete in senior tournaments against men much younger than himself, and the sport became such a passion for him he also took several golfing holidays.

Members at the Dunfermline Golf Club have paid tribute to the well-known and much-liked golfing star.

Robert De Rose, Secretary of Dunfermline Golf Club, Crossford, said: “Tom was a remarkable chap who would play this course at least twice a day.

“He didn’t really hit the ball that far, but it was always straight down the middle.

“It was a real shame he had to stop playing in December because he was part of the fixtures and fittings around here. Everybody had time for Tom.

“He was such a wonderful ambassador for the club, and it was an honour to call the man my friend.”

During his youth, Tom was also a former Middlesex Colt cricketer as well as a talented goalkeeper.

In the RAF he played inter-services rugby and football and was spotted by scouts for Arsenal and Spurs.

Spurs were so keen to sign him they offered to buy him out of the RAF on September 2, 1939 – unfortunately, Britain declared war the very next day spoiling Mr Galloway’s sporting plans.

During the war he piloted Sunderland flying boats as a daring test pilot, and was a Japanese prisoner-of-war for a spell.

Born in 1911, he travelled to Scotland during wartime and decided to stay north of the border soon after.

Tom and his wife Isabella lived in Glasgow for 20 years before moving to Edinburgh where he eventually retired.

Tom Galloway is survived by his daughter Isabella, grandson Paul and son-in-law John.