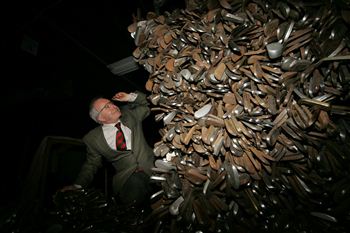 A SCOTS collector has sold 7,000 antique golf clubs to a Chinese businessman for a massive £120,000.

The haul is thought to be the largest-ever collection of hickory clubs, with all the items dating back to before 1930.

John Dixon, of Edinburgh-based dealers Georgian Antiques, picked up the putters, drivers and irons over a period of 12 years from auctions and specialist shops.

Now, the dealer is planning on starting a fresh collection after fetching the huge six figure sum from a Chinese entrepreneur.

Mr Dixon, 51, said: “The customer found the hickory clubs by searching on the internet and coming across our site.

“He travelled over from China to inspect the clubs with a small entourage of people as he didn’t speak a word of English.

“He sampled the clubs and spent a lot of time looking at every one of them and when he saw how unique a collection it was the deal was done.”

Mr Dixon, who is an avid golfer, said: “It is phenomenal to think all these clubs are going to one man.

“The total number of 7,000 might seem like lots but in China that’s hardly anything so I think he’s going to be looking for more.”

Hickory clubs differ from modern clubs with their wooden shaft and have become a top collectable among devoted golf fans.

While players initially carved their own clubs and balls from wood, they soon turned to skilled craftsmen to produce competitive equipment. 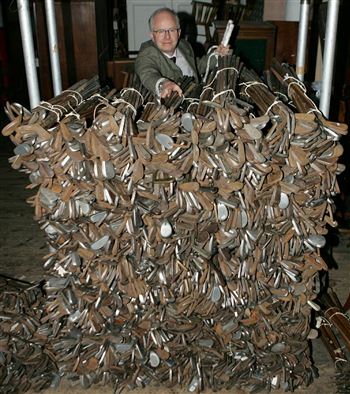 Mr Dixon, who has been running the Leith-based antique business with his brother Padraig for 30 years, said the clubs would all need to be restored.

He said: “There is a lot of work that needs to be put into a hickory club before it is playable. The shaft needs re-oiled and the grips will need redone.

“But when they are ready, there is a massive attraction in using them.

“Picking up a hickory club for the first time is a reality pinch for all golf lovers.

“It’s part of the sport’s history and playing with the old club is a chance to play with the same tools that some of the most skilful golfers ever played with.”

Chris Homer, a world-renowned hickory player, said it is likely the Chinese entrepreneur will launch a hickory golf business in his native country.

Mr Homer, 60, has been running hickory golf events across Scotland for 13 years and recently took his own collection to Canada where 1,300 players took part in a hickory championship.

He said: “It’s very interesting that one man would want to buy so many clubs. But there are a number of new golf courses popping up in China and it’s fair to say there is a real boom in golf taking place.

“He is probably taking the business idea of hickory golf to China and he could make a very nice little business out of it.”