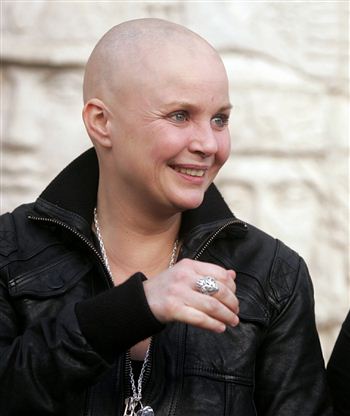 AN INTERNATIONAL alopecia campaigner is appealing to Edinburgh sufferer Gail Porter to help them spearhead her new worldwide campaign to raise awareness of the condition.

Mary Marshall, from San Diego, California, is organising a worldwide National Bald Out – a day where women across the world are being urged to ditch the wigs and go out in public bald.

Mary suffers from alopecia areata and is hoping thousands of other sufferers will join her in celebrating their baldness on July 19, 2009.

Women’s groups in Scotland are being urged to organise their own event in an effort to promote public awareness and the acceptance of bald women – and she hopes Gail will help them.

Mary said: “I go out bald all the time, for me it’s the most comfortable, cool, and natural way to be. I’ve tried wigs but I just can’t wear them.

“If you’re a woman with alopecia areata who is struggling with self image who doesn’t like wearing a scarf or a wig all the time, but who hasn’t yet taken the step of going out in public, the National Bald Out is for you.

“It doesn’t matter if you’ve got no hair, bald spots or patches of hair – for one day please take it off.

“Where ever you live, on Sunday July 19 come out of the wig closet. It might change your life and it might change the way people see bald women.

“It would be amazing if Ms Porter agreed to help out in any way she could.”

Telly presenter Porter, 38, famously developed alopecia in 2005 after her marriage to rock star Dan Hipgrave collapsed and she battled with stress, drug addiction and post-natal depression.

She refused to cover up and wear a wig in public, instead she bravely decided to maintain a public profile and raise awareness of the condition.

The Scots beauty’s experiences with baldness were made into a BBC documentary, and she also bared her soul concerning her condition in her 2007 autobiography.

Porter shot to fame in 1999 when lad’s mag FHM beamed an enormous projection of her naked body onto the Houses of Parliament.

The stunt was organised to promote the magazine’s Top 100 Sexiest Women competition.

Friends and relatives of alopecia sufferers are also being urged to join in the fun by wearing National Bald Out t-shirts in support of the cause.