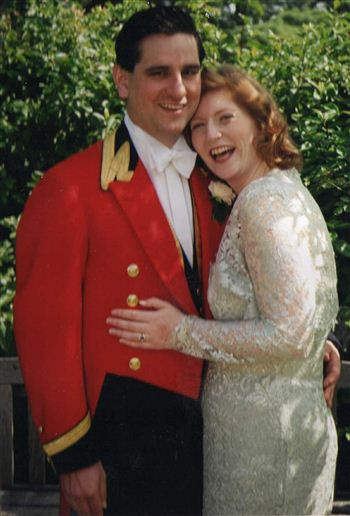 A HUSBAND and wife who worked for the Queen say their life has been made a living hell by teenage neds terrorising them after they settled to start a new life in Dundee.

Cory Campbell worked as a butler and wife Lisa as a catering manager until retiring from the Royal Household in 2001 so she could try a new career.

But a new life in Scotland for pair, who claim to count Princes’ William and Harry among their friends, has turned to one of despair.

Instead of what they hoped would be an idyllic lifestyle near the River Tay, their daily routine has become a living nightmare leaving them living in fear of violent teenage gangs they claim rampage nightly outside their dream home.

Former-Royal butler Cory Campbell says his family is “going through a living hell” and is under constant harassment from up to 50 youths who congregate nightly in Dundee’s notorious Baxter Park.

Mr Campbell, 40, claims the park has become “lawless” as police regularly fail to deal with the growing problems.

The dad-of-three has listed a catalogue of horrific, violent events which he says has left the area “effectively abandoned” by the authorities.

Baxter Park is infamous for being the home patch of local gang, the Young Stobie Boys.

Mr Campbell says he has even been forced to install shatter-proof glass in all his windows, mount CCTV cameras around the building and put in a state-of-the-art alarm system to protect his young family.

The problems came to a head last month when three children – one as young as six years-old – were caught smearing his front door with dog excrement.

Their only punishment says Mr Campbell was a police letter sent to the children’s parents.

Over the past two years Mr Campbell claims to have witnessed gang battles involving up to 50 youths for 10 nights in a row, one young lad being attacked by a group of 10 yobs three times over a half hour period and a 14 year-old being left for dead in the park after being given a drugged drink.

And according to Mr Campbell, a 14 year-old was hospitalised with a face injury in a horrific incident involving two adults just weeks ago.

The Campbell’s only moved into the former park keeper’s house last year, but the family say they are now seriously considering moving as the violence continues to escalate.

Mr Campbell said: “We thought we were moving into our dream home when we bought this lodge house. It’s the only property in the park and we thought it would be great for the kids.

“But the last two years have been an unbelievable nightmare. We’ve had kids turn up at our door covered in blood looking for help – it’s like a warzone out there sometimes.

“I’ve tried complaining to the local council and the police but the park is effectively abandoned at nights leaving the kids to run riot.

“We try and talk to the kids who come to the park because most of them are fine, but it’s when the bad eggs turn up that it all kicks off.

“To me, the police do not seem to be doing much about the problems and it looks like they are trying to keep the crime figures down.”

Mr Campbell claims to have found homemade knuckledusters, nunchuks and a 12’ blade during his daily walks through the park.

He claims has been forced to write countless letters and make hundreds of calls to police and the council as he battles to contain the trouble.

And in one of the most horrific episodes, Mr Campbell says he saw three adult men terrorise two small seven year-old boys by setting their dog on them while the kids played in the playpark.

He said: “The main problem I can see is that the violence just seems to be getting swept under the carpet. I’d like to see the problem being dealt with properly and publicly.

“Because nothing gets done by the authorities, it just sends out a signal to others to come and cause trouble because they know they can get away with it.

“It’s such a beautiful park, but because of the constant intimidation I feel like moving my family away from here.

“I’ve got three young kids and I need to put them first.”

But local councillors and the police are playing down Mr Campbell’s claims saying he is “over-exaggerating” the area’s problems. 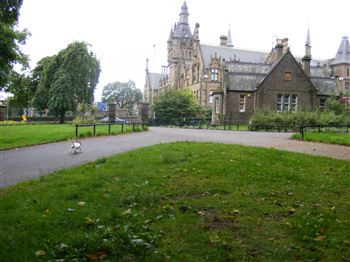 Elizabeth Fordyce, SNP councillor in the area for the past 10 years, said: “I’m afraid the Campbell’s are over-exaggerating the problems in Baxter Park.

“Yes, there are up to around 60 youths who congregate there in the evenings, but, as far as I’m concerned, the vast majority are very well behaved.

“That is a terrible slur on the policemen and women who, quite frankly, put their lives on the line for our community.

“At the moment, we have youth workers, community wardens and the police all working together as a team to help make Baxter Park a lovely place to visit.”

Chief Inspector Kevin Lynch, of Tayside Police, said: “We have been working with MSP’s, local councillors and the general public to make Baxter Park a better and safer environment for everyone who uses the area.

“Mr and Mrs Campbell certainly use emotive language, but Baxter Park is no worse for youth trouble than any other area in Dundee.

“Currently, there are on-going talks with Dundee Council regarding how to make the area safer, and, of course, we would promote the use of better lighting and CCTV in the park.

“But, you have to remember better lighting could also attract more youths to the area.

“I would encourage Mr and Mrs Campbell to join their local community groups to help solve any problems they encounter.

“And I refute the claims that Baxter Park is abandoned at nights as most of the incidents reported to us someone has been reported to the Procurator Fiscal.”

However Dundee councillor Ken Lynn, whose house also overlooks the park said he sympathised with some of the trouble the Campbell family were enduring.

He said: “If somebody put dog excrement through my door I would be very upset.

“There are often large groups of young people in the park.

“I’m so fed up and frustrated with it because several million pounds have been spent on the park over the past few years.

“Baxter Park is a great asset to Dundee, and while most of the time it’s a peaceful place, I’m very concerned about it being depicted as a trouble hot-spot.”

During his five years at Buckingham Palace, Mr Campbell – the first Canadian to work for the Royal Household –  used to work as a butler to the monarch and the cleaning of the Crown Jewels were among his many duties.

Wife Lisa, 39, was also an employee at the Palace for around eight years and she worked as an official responsible for the Royal’s catering budgets.

And Mr Campbell, who admits the Queen often caught him and other butlers hiding in the vaults eating the leftover desserts after a lavish meal, said the family were just like any other.

He said: “They liked to have fun and they had such a great sense of humour.

“They were a fantastic family to work for.”

In 2007, Baxter Park underwent a huge facelift after being awarded £3.2 million by the Heritage Lottery Fund.

The newly-transformed park was then opened by Her Majesty The Queen.