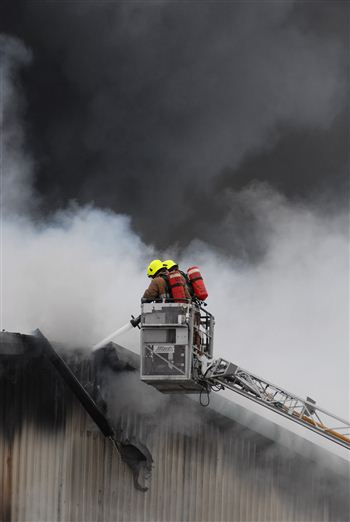 SEVERAL of Scotland’s top hotels and restaurants were last night scrambling to find new meat suppliers after a massive early morning blaze destroyed one of the country’s biggest family firms.

Maximum security Saughton Prison in Edinburgh was one several other places to have their food supplies badly disrupted after fire ripped through Campbells Prime Meat factory in Broxburn, West Lothian.

Football clubs Rangers, Celtic and Hibernian are also among the high profile clients serviced by the devastated processing works.

More than 300 workers based at the factory are also facing an uncertain future as company owners hunt for new premises to salvage their business following the 12-hour blaze thought to have been sparked by a gas leak.

Some £2 million of damage is thought to have been caused at the business which supplies  beef, poultry and fish to clients across Scotland including schools.

The Gleneagles Hotel and Michelin-starred chef Martin Wishart’s own restaurants are among those who have had to find temporary alternative meat sources.

Last night Wishart described the 80,000sq ft factory as “Scotland’s most important” meat centre and vowed to support it.

He said: “The factory is one of the biggest and most important parts of the delivery system in Scotland and is very highly rated for its standards.

“They have been my supplier since I started 12 years ago and while plenty of people knock on my door for custom, I will always stand by them.

“I am good friends with the Campbell family and I have no doubt they will recover from this.

“They and their staff went to bed on Monday evening and woke up to find the place they work wasn’t standing.

“It’s awful and I have already sent my sympathies.” 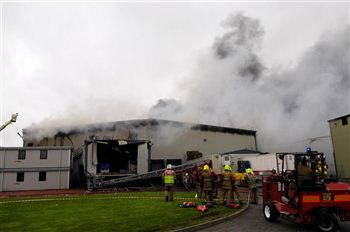 A spokesman for the Scottish Prison Service said contingency plans had been made to ensure no prisoners would go hungry.

They added: “We are aware of the fire but we have got more than one meat supplier and have a contingency plan in place to minimise the effect.”

Yesterday the company’s website advised customers that they will be making no deliveries in light of  “unforeseen circumstances”.

It said: “We apologise that due to unforeseen circumstances there will be no more deliveries in the near future.”

The family-owned Broxburn firm’s boss Edward Campbell was already on the hunt for a new factory within hours of the blaze.

A Campbell’s source said: “There’s nothing inside that’s salvageable unless you like your meat very well done.

“The MD is already on the road right now to find a new headquarters to get us back into the game.

“He doesn’t want to let down all the farmers and fishermen who use us.

“It was a gas leak that was too dangerous to stop and luckily everyone is okay.”

Nightshift workers were evacuated at 2.30am yesterday with smoke from the factory said to be rising 2000ft into the air.

Edinburgh airport’s control tower operators were put on alert as smoke drifted close to a flight path, but no flights were redirected.

Watching on as around 50 firefighters tackled the fire, worried fish handler Mike Gibson, 31, said he was unsure whether to look for a new job.

He said: “All we’ve been told was not to come in today.

“I know it’s early doors but it would be awful if they can’t find a new factory.

“It’s very complex inside with huge refrigerated areas and that’s why it’s burned for so long.

“You’d hope there are enough empty factories around that the management can find a new one but in this current climate as someone who needs a wage you’ve got to look at your options.”

Police said the fire has “caused extensive damage” to the building and roof and investigations are ongoing.

They added that the fire did not appear to be suspicious.