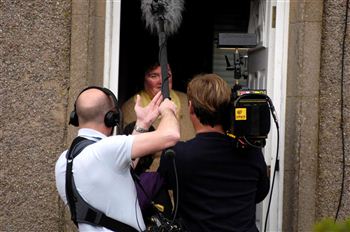 A TV crew was given an exclusive guided tour of Susan Boyle’s house yesterday – for the Oprah Winfrey show.

Footage from inside her modest council house in Blackburn, West Lothian, will be beamed to millions of viewers across America when singing sensation Susan is interview by the Queen of American TV.

The US chat show host has had the Scottish spinster on her radar ever since her stunning performance on Britain’s Got Talent.

And yesterday she began to make good her promise of featuring the Scot by having a camera team film a day in the surprise singing sensation’s life.

One of the crew, who arrived in a convoy of two cars, confirmed: “We’re here filming an interview for Oprah Winfrey.

Susan, who was all smiles yesterday, wore a lemon coloured shirt and black trousers to greet the team and later a gold coloured jersey to guard against the cold with just weeks to go until the semi final of Britain’s Got Talent.

She could be seen ushering them from room to room inside the two level property and a piano being played was heard at one point. 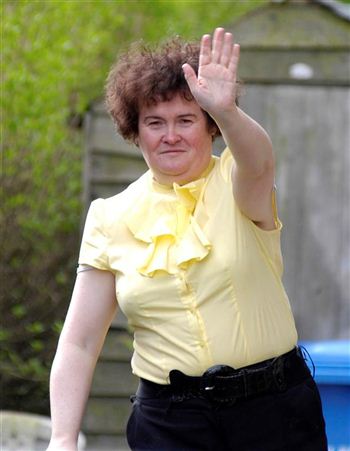 The crew arrived at around 10.30am and only stopped briefly several hour later saying Susan was having “an afternoon nap” while they tried to persuade neighbours to be interviewed on camera.

Later they mocked up a ‘welcome to my house’ scene with Susan ushering the camera crew inside then spent over an hour going from room to room inside.

One onlooker said: “Susan was clearly happy to give the American crew an insight into her life. They seem to have an insatiable appetite to know all about her.”

Simon Cowell has already said that Susan could crack America and top the album charts.

Her appearance on Oprah will be the highlight of a slew of appearances Susan has already made on US television.

Just days after her celebrated performance on Britain’s Got Talent, she was doing the rounds of America’s top morning TV chat shows and even appeared live via satellite link-up on the legendary CNN interviewer Larry King’s show.

Susan previously said of Oprah’s interview request: “I might accept the offer if I get the chance.

None of the crew was prepared to say just when the footage will be screened.