LORD Mandelson has reacted furiously to suggestions that his expense claims, published today, amount to a defrauding of the British taxpayer.

The Secretary of State for Business, Enterprise and Regulatory Reform was bustled into his private van by his press team yesterday after being confronted about the scandal during a visit to a Scottish life sciences company.

When asked if he felt any personal responsibility for the crisis, Lord Mandelson replied: “I think what people need to focus on is not the attempt by one newspaper to besmirch politicians as a whole.

“Instead we need to concentrate on what politicians believe in, what they stand for and what they are doing for the country.

“Times are really tough at the moment, and when you see stuff like what’s in today’s Daily Telegraph, you really do have to be philosophical about it.”

But when asked if Prime Minister Gordon Brown was right to pay his brother, Andrew Brown, more than £6,000 pounds to clean his Westminster flat, the Secretary of State refused to answer the question, and was whisked away by angry aides.

The scandal is the latest expenses storm to engulf the Westminster cabinet, with Lord Mandelson among 13 other cabinet members facing questions over their claims.

After announcing he was stepping down to become EU Trade Commissioner, Lord Mandelson claimed thousands to improve his Hartlepool constituency home, later selling the property at a profit of £136,000.

In an earlier interview with BBC Radio Scotland, Lord Mandelson said: “This story has been presented in a way which casts aspersions on people’s motives, which is incorrect.

“The expenses claimed were to perform essential maintenance on my property, and would not have been paid if they were not within the rules.” 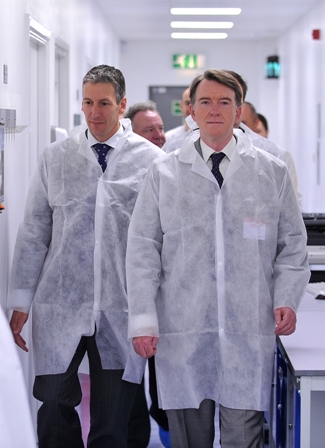 “This story is a classic of its kind – they take a germ of truth and they turn it into something it isn’t, and present it in such a way as to provoke a reaction.

“The whole point of this is to provoke these sorts of responses.”

The details published include Justice Secretary Jack Straw claiming his full council tax despite receiving a 50% discount from his local authority, and Prime Minister Gordon Brown claiming for the same plumbing bill twice within six months.

The emergence of cabinet ministers’ claims will raise further questions about the parliamentary expenses system, which has come under fire in recent months for being too open to abuse.

Lord Mandelson added: “Let’s wait and see, shall we, whether the Tories’ expenses provoke quite the same reaction.

“They know full well that by the time the initial impact from this story has worn off, people will have less interest, and that is what they have planned.

The exchange came during a scheduled visit to Scottish pharmaceutical company Intercell Biomedical, which is the only location in the world for the manufacture of the Japanese Encephalitis vaccine.

The visit coincides with the launch of a new report, outlining how businesses can survive the downturn by investing in a high-tech, low-carbon future.