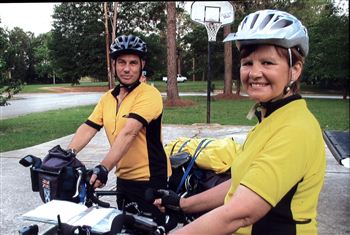 TRIBUTES have been paid to a super-fit fire hero who has died after collapsing with a heart attack during a mammoth eight-month cycling tour of the US.

Former-Royal Marine John Body, 56, fell from his bike while cycling up a steep slope in front of his wife Linda in the southern US state of Georgia last week.

Devastated Linda, 55, from Dunfermline, Fife, frantically tried to save her husband by administering CPR, but the ex-firefighter was pronounced dead on arrival at the nearby Perry Hospital.

The couple’s cycling tour was described as a “lifetime’s ambition” by Mrs Body who revealed the pair were just seven days into their dream trip when her husband passed away on May 12.

Mrs Body praised locals in the small American town for their “unbelievable hospitality” and was “overwhelmed” with their help and support following the tragedy.

Mrs Body said: “We had been looking so forward to the trip and had planned to cycle right across the States. We had left things open-ended and thought we might try and head to Australia and New Zealand afterwards.

“The trip was a lifetime’s ambition for both of us.

“It had been really hot that whole week – in fact the day John passed away the temperature was in the 40s.

“We set off as usual at seven am, but after a couple of miles we had to pull in because John was complaining of a sore, dry throat.

“He said he would give it half-an-hour and see what he felt like then.

“He seemed fine and we were both really enjoying the ride.

“I was right behind him as we approached the top of a steep climb and he just keeled over to the side.

“I rushed over and tried to give him CPR but there was no response. Drivers on the road pulled over and called the ambulance for us, but unfortunately it was too late to save him.”

Mrs Body also revealed locals in the town of Perry, Georgia, rallied round and made sure she had somewhere to stay and that she was not left alone.

She then had the unenviable task of telephoning her only daughter Katie, 22, to tell her the bad news.

Katie, and her husband Ben, immediately flew out to the US to comfort her distraught mother.

Mr Body, who had no previous history of heart trouble, was then cremated at a service held at the local funeral home in Georgia.

A keen cyclist, climber and hill-walker, Mr Body worked as a firefighter for 26 years before suffering a back injury when a burning lintel fell on him forced him into retirement in 2001.

A spokesperson for Fife Fire Service said: “John Body was a valued and trusted member of the fire service and our thoughts are with his wife and family at this time.

“During his time with the Service, John received the Long Service and Good Conduct Medal.

“He was also commended for his actions at a road traffic collision when he put his life in danger to assist the driver who was trapped in the cab of his overturned lorry.”

Before that he had served for nine years in the Royal Marines, which he had joined straight from school, and had completed four dangerous tours of Northern Ireland.

And since being forced to retire from the fire service, Mr Body has been working as a mobile library driver for Fife Council.

Dorothy Browse, Service Manager, Libraries and Museums, said: “We were all very shocked and saddened to hear of the sudden death of a very popular colleague, while on the holiday of a lifetime with his wife, cycling across the United States.

“John operated the Mobile Library service in central and west Fife for nine years, making many friends in the course of his work.  He was always keen to help his customers and colleagues, going the extra mile when required.

“He forged strong friendships which extended outside work, where his help with DIY projects was especially welcome.

“John was a highly valued member of staff, always reliable and cheerful, and is now sadly missed by all who knew him.”

A memorial service will be held at East End Park in Dunfermline on Sunday, and Mrs Body has asked for no flowers but said that donations can be made to the ex-servicemen charity fund Help for Heroes via the website www.justgiving/lindabody.