Monster tank to parade down the Royal Mile

POT HOLES in Edinburgh city-centre are finally to meet their match when the Royal Scots Dragoon Guards drive a Challenger 2 main battle tank along the city’s famous Royal Mile.

The monster vehicle will be part of their July 4 homecoming parade through the city joined by the Brit award winning Pipes and Drums as well as some smaller armed vehicles.

Having arrived safely back from operations in Iraq in December, the regiment will parade through Edinburgh, Glasgow and Perth where they have the freedom of the city.

But weighing in at a hefty 62 and a half tons, getting the tank onto Edinburgh Castle esplanade at the top of the mile might prove to be a bit of a challenger itself.

But Captain Roddy Christie, 32, is confident that they will be able to get the giant tank to the castle for the start of the march.

He said: “We have to transport it on a low loader truck and there are some tight corners around the top of the Royal Mile.

“But the council are happy with it and we shouldn’t have a problem.”

The last time Scotland’s capital had armoured vehicles driving through it caused a bit of damage.

Fourteen tanks took to Princes Street in 1968 for a similar parade, leaving the council with some cleaning up to do.

Captain Christie said: “They crushed quite a few drains on their way along the street and took out a traffic light.

“We’ll try and not do that this time.

“There won’t be a problem with weight as each of the separate bits of the tank’s tracks carries less pressure than a Land Rover.”

The parades give the soldiers the opportunity to show the public what they do.

Captain Christie said: “We do these parades partly because we have a duty to show the public what we do, as at the end of the day they pay their taxes to fund us.

“It’s also great for the young soldiers who are really proud of what they are doing and want to show the public that they are serving their country.”

Four soldiers man the Challenger 2, each with a specific job.

The Loader is responsible for loading the ammunition into the gun and making sure they keep track of the communication on the radios.

It is a job that Corporal Matt Byrne, 29, has done for six years.

“Turned my life around”

He said: “They say that the Loader is the mother of the tank, as we’re supposed to do all the cooking and make the tea.

“Before you get to this position, you have to have worked your way up.

“You start as a driver, and once you’ve done that for a couple of years you become a Gunner, before moving on to Loader.

“Joining the army turned my life around. I didn’t have much going for me and didn’t want to fall in with the wrong crowd.

“Nine years later and I’m making money and have grown up a lot.”

REPORTER Cara Sulieman normally drives a 02-registered Ford Ka. Yesterday she got behind the controls of the largest battle tank in the British Army – the Challenger 2. Here she compares them:

Despite the fact that the Challenger 2 is the biggest tank in the British Army, it looks surprisingly small up close.

Not as small as my Ford Ka. Then that doesn’t have a turret either.

It also becomes quickly apparent that the vast majority of the machine is engine and armour – the inside can only be described as ‘snug’.

Once inside and in place, there is no room for movement, and it really hits home how hard it must be for the soldiers to spend months on end living in these tanks.

But all that hardship is forgotten with the growl of the engine as it starts to trundle along.

Peeking out of the top of the Tank Commander’s hatch in the turret you realise just how large it really is.

All you can really see of the tank itself is the platform immediately around you, and the head of the soldier in the neighbouring hatch.

When you’re watching it drive down the airfield runway, it seems to be speeding and bumping along.

But the Hydrogas suspension is superb and you don’t feel a thing.

Not an experience I can enjoy in my own motor where even the smallest of potholes poses a cavernous danger.

Neither does the tank feel like it’s going that fast – but I put that down to the fact that it’s so big that you can’t really tell.

The only sign that you’re travelling at some speed is the wind snapping at your cheeks.

The only wind in my hair usually is because of the crack in my windscreen.

But the best part of the whole experience is the radio built into the helmets, an essential to communicate above the noise of the engine when out on patrol.

Sure, you can’t play music.

But driving along in a tank whilst having a banal conversation about cats with an army captain has to be the strangest thing I have ever done.

It’s certainly a lot more fun than driving a car. 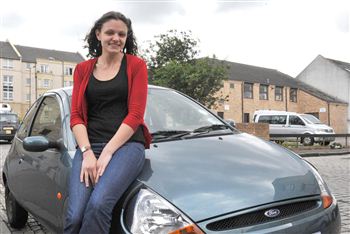