A NEW arrival at Edinburgh Zoo is thrilling visitors – a miniature hippopotamus.

Little Leisha – which means “gift” in West African – is a pygmy hippo, the pint-sized cousin of the gargantuan beast that lives in the rivers of sub-Saharan Africa.

Born on 9 June, the tiny arrival is the 16th baby hippo to be born at the zoo in 30 years.

Darren McGarry, animal collection manager at Edinburgh Zoo, said that the pygmy hippo baby was an exciting addition to the zoo’s menagerie.

He said: “This baby will be very popular with visitors to Edinburgh Zoo this summer.

“Ellen is proving to be a great mum to Leisha – the calf has gradually been gaining weight and she is now old enough to begin exploring her enclosure and can been seen by visitors.”

Pygmy hippos are an endangered species, with the most recent estimates suggesting there less than 3,000 remaining in the wild.

Although they have no natural predators in the home of West Africa, they are sometimes hunted by leopards, pythons and humans for their meat.

Along with deforestation by the timber industry, this has severely reduced their numbers. 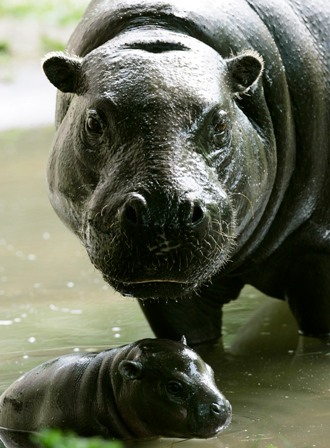 Mr McGarry added: “Its birth will also contribute to the sustainable breeding of the pygmy hippo species both in UK and Europe.

“Edinburgh Zoo is only one of a few zoos in the UK to care for this species and we have a particularly successful breeding record, having produced 16 hippo calves in less than 30 years.”

Leisha is the first baby to be born by German hippo Otto and Edinburgh native Ellen, and was unveiled on one of the hottest days of the summer.

She even enjoyed an impromptu shower as she bathed in a pool with mum.

Karen Stiven, hoof-stock keeper at the zoo, said: “There are a lot of other babies in the park at the moment, and they’re all enjoying the nice weather.

“When it gets hot in Edinburgh Zoo we give a lot of the animals showers, and there’s plenty of pools for them to bathe in.”