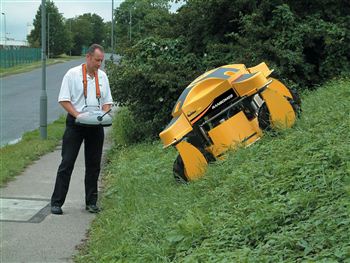 HEALTH and Safety laws are forcing a cash-strapped Scots council to buy new lawnmowers which cost more than a top of the range car.

Fife Council is contemplating shelling out nearly £30,000 for each of the armchair-sized remote-controlled mowers.

New safety guidelines will now restrict council staff to use the machines if the gradient of a piece of land is deemed greater that 15 degrees.

Any strip of land over that gradient would automatically trigger a risk assessment and require workers to wear and use specialist equipment.

Now council chiefs are looking at new ways to stop the grass growing in a bid to find a solution to the problem.

They are currently weighing up alternative options such as growth retardants, alternative vegetation and not mowing any area considered a particular risk.

The other idea is the specialized machines that can cope with different terrains.

Porsche of the lawnmower world

Jim Hooton, the council’s service manager for parks and countryside, said: “We’re keen to cut as much as possible but we have top weigh up a number of factors – the cost of the machines, what they can and cannot do, how long it takes, how many we need and where they are going to be used.

“It could cost more and we have to weigh up if it’s cost effective to buy specialist machinery.

“Our yearly budget is only around £100,000, so to buy these machines would eat up much of our resources.”

“You could get a Porsche for less than that.

“They’re operated using a console and there are joysticks to make them go forward, back, up and down, start and stop.

“Some of them work and some of them don’t – you can imagine if the slope is really bumpy it could get knocked over. 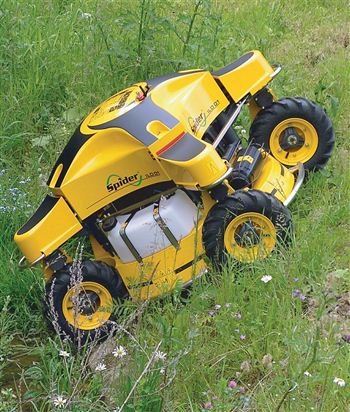 A report from parks and countryside from March 2009 highlights there have been 30,968 serious injuries and 143 fatalities within the UK’s land-based industries – which includes land management and grounds maintenance sectors.

It stated there had been four machine roll-overs in Fife last year, although there was no report of serious injury or fatalities.

The new restrictions will also cover all private contractors working on behalf of the council.

Mr Hooton added: “This comes from the Health and Safety Executive and if there’s an accident then we will be responsible. We as a council would be breaking the law.

“The steeper the slope you get the more dangerous it is for the operator, so we have to make sure that the operator is safe at all times.

“I would hate to think that we could get a fatality.”

Roger Bibbings, an occupational safety adviser for the Royal Society for the Prevention of Accidents, said: “A good system to prevent any type of work-related accident involving mowers will give consideration to vehicle selection as well as other issues such as regular maintenance, the competence of workers and how vehicles are used.

“In short, the right equipment needs to be used in the right way for the task in hand.”