The couple wed in the atmospheric, candle-lit chapel in the crypt of the ancient Balgonie Castle, near Markinch, in Fife. 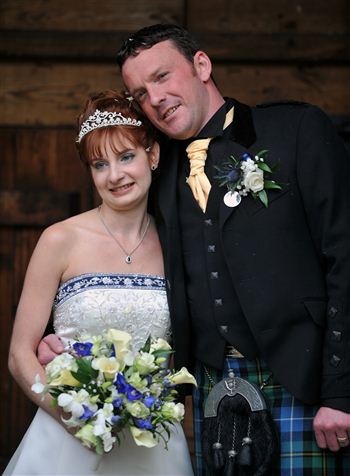 Guests were welcomed with the sight of the Stars and Stripes flying alongside the blue and white of a single Saltire high above on the castle’s ramparts to mark both John’s Scottish and Christy’s New York roots.

Smeaton, 33, who famously helped stop a terrorist attack on the airport in June 2007, arrived the 14th Century building in a silver Ferrari Scaglietti.

He looked resplendent in his Ancient McNeill of Barra Highland dress, laughing and joking with friends beforehand.

His blushing bride, meanwhile, forgo her right to show late and turned up a full five minutes before the service began in a gleaming silver Rolls Royce Phantom that once belonged to Take That star Gary Barlow.
The heavens chose to open up just as the 33-year-old made her entrance, but nothing could dampen the dazzling smiles as she strode down the aisle.

Celebrities invited to the wedding included Glaswegian comedienne Janey Godley.
On the steps outside as family fussed over his new wife, overjoyed John said: “It might well be raining but this is the happiest day of my life.

“I’m really looking forward to be a married man. 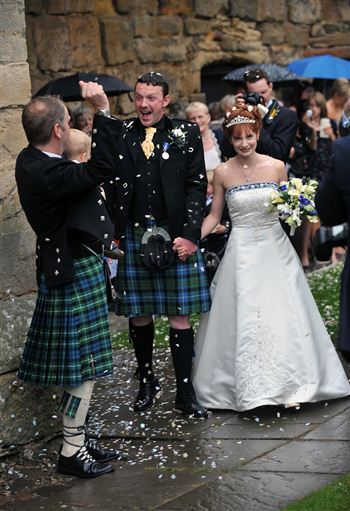 “I thought I’d be nervous but I was remarkably calm.

“Christy’s family, including her mum and dad, travelled over to for the wedding. Everyone’s here.”

He revealed he spent his last night of freedom with close pals at the Ardgowan in St Andrews, Fife, with friends revealing that the wedding reception was being held at the town’s Scores Hotel late into last night.

Smeato said he and his friends enjoyed a “fairly quiet” stag do in Glasgow city centre earlier this week, but admitted he was eventually overwhelmed with well-wishers.

He said: “I went out in the city centre with a good few of my mates and we just wanted to keep things fairly quiet.

“But once word got out people came up to us to wish me all the best.

“It’s lovely to think people still care about what I get up to.”

After the ceremony he revealed they hoped to spend a far quieter few days together as husband and wife.

He said: “We’ve not really planned a honeymoon as such. We’re just going to do some family stuff and maybe get away for a couple of days and visit some whisky distilleries up north.”

Christy stunned Smeato when she took advantage of the Leap Year tradition and popped the question herself when the pair visited the Drover’s Inn, by Loch Lomond, last year.

And the loved-up newly-married couple has still to decide where they will eventually settle down.

John said: “We’re still not really sure where we will live. I think Christy would like to move back to the States but we’ll just play by ear for the next few months.”