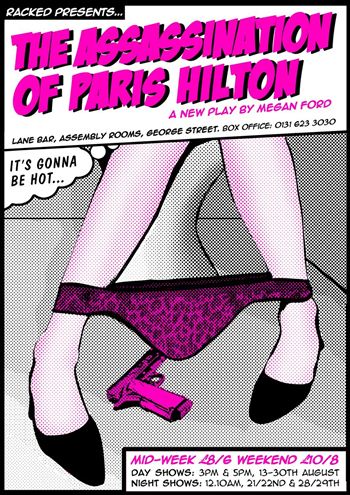 HOTEL heiress Paris Hilton is in for a shock if she visits Edinburgh this summer – the cast of a new play are planning her assassination.

The production, called the Assassination of Paris Hilton, is by London based group Racked Theatre.

It sees two girls in the bathroom of a nightclub in Holywood planning the star’s death because they are sick of celebrity culture.

But the writer insists that she has nothing against Hilton herself and the play is about celebrity rather than any particular star.

Megan Ford, an artistic director of the theatre group and writer of the play, said: “I feel the need to mention, that despite the controversial title, the play is not an attack on Paris Hilton, but rather a depiction of female relationships and the culture of celebrity worship.”

“If Andy Warhol and William Shakespeare got married and adopted a third-world child, we would be that child.

They have already secured at least one high profile fan in the shape of Radio 1’s Scott Mills who is coming to the Fringe Festival with his own musical this year.

With such a snappy name, the show has already gained fans across the world and earned a mention in quite a few must-see lists.

Fans of the play can even get their hands on an “I Killed Paris” t-shirt from the group, who are hoping that the concept of assassinating the heiress becomes a trend.

It is the first production for the new group who say that they aim to make theatre that is “challenging”.

Megan will be staring in the show alongside four other cast members when it hits Edinburgh from August 13 – 30 at 3pm and 5pm in the Lane Bar at the Assembly Rooms.