A JILTED worker torched a block of flats at a housing development after bosses cancelled his contract – trapping two pensioners in their third-storey home. 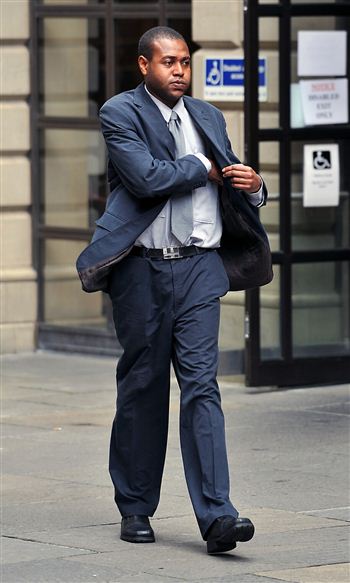 Cala Homes bosses had cancelled the casual contract David Muchemwa had with them just days before he set fire to the building at their Fettes Rise development in Edinburgh.

Muchemwa, 31, claims he checked each flat in the building to make sure it was empty before using petrol soaked clothes and the fuel itself to set two fires in the building.

But a 72-year-old man and his 68-year-old wife were left trapped in their home after smelling the reeking fumes caused by the blazes.

They had tried to escape but found their way blocked by the thick smoke and had to wait in their home until firefighters rescued them.

Muchemwa – who later realised there were residents in the block – waited for the emergency services to arrive before fleeing home.

He later confessed his crime to a police operator and at Edinburgh Sheriff Court he admitted endangering lives by wilful fire-raising.

Fiscal depute Aidan Higgins told the court how the firebug had been working for Cala for two months before his agency contract had been cancelled by the housing firm three days before the fire was started.

Mr Higgins said Muchemwa had drank eight beers and made five calls to his former employers over the course of Decmeber 19 last year before calling his boss and making threats.

He said: “On the day of the offence between mid-morning and evening the accused telephone the site manager at Cala Homes on five occasions.

And at 8pm Muchemwa made his last call, telling the site manager “It is me, I have done it, I have set it on fire”.

Mr Higgins said Muchemwa had set two fires at 18 Fettes Rise – the only block that had been completed on the development.

Muchemwa claims he then realised that there were people in the block and called 999. He waited for fire and police officers before leaving the scene of the crime.

Mr Higgins said the pensioners in the building had realised the block was ablaze but had been unable to get out.

He said: “That couple had become aware of the smell of smoke but, going out into the stair well they found they could not go down the stairs on account of the heavy smoke so they remained in the flat until the fire was extinguished and they were taken out by fire officers.”

Muchemwa had by this time returned to his Wester Drylaw Place home in Edinburgh where he made another 999 call.

He spent around 30 minutes giving an account of his actions to an operator, telling her he had set fire to the flat because his “boss had not paid him” before police officers came and took him to Drylaw Police Station.

During an interview he told them he had drunk about eight beers before he set fire to the building.

Mr Higgins added: “Because of the heavy black smoke there was considerable damage done in the common stairwell and extensive redecoration was required – the total cost of all work repairs came to £52k.

Sheriff James Scott deferred sentence for reports – including a psychiatric assessment – and Muchemwa will have to return to court next month.

CALA to debut in East Calder at upcoming development launch