A WOMAN stabbed her husband five times following a row about her mother – while her two young daughters slept upstairs. 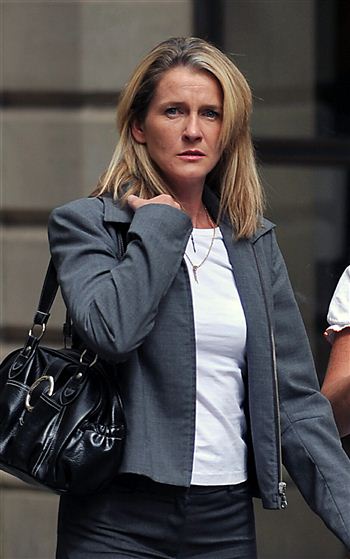 Victoria Walsh, 41, knifed husband of 10 years James after he called her mum “a slut”.

She plunged a five-inch long kitchen knife into him five times, puncturing his right lung, before calling police.

Officers found Mr Walsh sitting on his toilet with his blood soaked top beside him before he was taken to hospital for surgery.

Mr Walsh needed two operations after his lung collapsed because it had been punctured by the blade and spent a total of almost two weeks in hospital.

Mrs Walsh told police she could not remember much about the assault and claimed she was “traumatised”.

But she was arrested on suspicion of attempted murder and at Edinburgh Sheriff Court she admitted assaulting her husband to the danger of his life.

Fiscal depute Aidan Higgins told the court how Mr and Mrs Walsh’s marriage had been under pressure because of his mother’s ill health.

On December 5, last year the couple had been drinking at their Granton Mill Drive home in Edinburgh when an argument broke out.

During the course of the argument the couple’s seven and nine year-old girls slept in the house.

Mr Higgins said it was unclear what the build-up to the attack had consisted of as both Mr and Mrs Walsh had been drinking.

But around 1am the next morning Mrs Walsh made a desperate call to the emergency services.

Mr Higgins said: “She asked for police and an ambulance and she stated in that call that she had stabbed her husband five times.

“Police officers went to the locus and found the accused standing at the front door of the house.”

Mrs Walsh took the officers into the bathroom of the home where her husband was sitting on their toilet with his top off.

The top was soaked in blood and it was obvious he had been stabbed several times.

Mrs Walsh then took the cops to the kitchen where she showed them a black straight edged kitchen knife and said that it was the blade that she had stabbed her husband with.

Mr Higgins said: “She mentioned that Mr Walsh had called her mother a slut.”

Mr Walsh was rushed to Edinburgh Royal Infirmary where surgeons found stab and slash wounds to his right chest, his left breast, his left loin and along the left side of his abdomen.

They operated on his collapsed lung, which had been caused by the 2cm deep puncture to his right chest.

He was released but had to return days later after a blood clot developed and was eventually kept in for 13 days in total.

Mr Higgins said that when Mr Walsh was reviewed in February he had made a complete recovery.

Mr Higgins said: “In her comments to police officers at that time she was entirely candid in the fact that she had stabbed her husband.

“She was detained on suspicion of attempted murder and she replied ‘I’m just traumatised’.”

Mr Higgins said that although Mr Walsh said the incident had been “a point of no return” for his marriage he had been keen to stress that his wife was a good mother.

Sheriff James Scott deferred sentence for background reports and Mrs Walsh will be sentenced next month.