A SECRET weapon was unveiled in the rehearsals for this year’s Edinburgh Military Tattoo yesterday – chocolate teacakes.

Hundreds of pipers, drummers and dancers from around the globe are spending the week going through their drills for the three-week Festival spectacular.

They are under more scrutiny than ever with this year marking the 60th anniversary of the world famous show.

So ringmaster Major General Euan Loudon brought along his brother Fergus – who happens to be the boss of Tunnock’s Teacakes – to offer up a sweet reward for their hard work.

Fergus dished out an assortment of cakes and caramel wafers to performers and pipers alike between drills at the show’s headquarters, Redford Barracks.

Among the show’s many ambassadors, Lord Provost, George Grubb was in attendance, meeting performers and taking stock of the ongoing preparations. 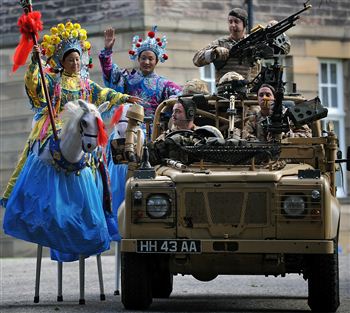 Tunnock’s biscuit boss, Fergus Loudon, also popped in to offer a moment of light refreshment to the hard-working performers.

As a lifelong fan of the event, he has plenty of fond memories of the show his brother organises.

He has been going since he was a child and still enjoys watching the many different performers.

As the company’s sales manager, Fergus exports Tunnock’s products worldwide and to over 30 countries, making him a perfect ambassador for the show.

Recalling the dreadful weather during last years performance, Mr Loudon was quick to point out that despite the poor conditions, “the vast majority stayed until the bitter end” – testament to the show’s unshakable popularity.

The Tattoo attracts a television audience of around a quarter of a million viewers globally, showcasing acts from over 40 countries, including China and Australia.

Major General Euan was also there taking advantage of his brother’s generosity.

As one of the Tattoo’s key organisers, Major General Loudon believes the continued success rests in the way the show has “evolved” and is nothing whatsoever to do with his brother’s biccies.

Around 35 miles of cabling will be rolled out around Edinburgh Castle to power the sound and lighting rigs.

Meanwhile, the Tattoo remains true to the four core elements of the show – mass pipes and drums, music of the military brass band, international acts, and the grand finale; the lone piper.

Mr David Durrett of the Reserve Regiment of the Cape Town Highlanders loves coming to Edinburgh at this time of year, saying: “For a piper it’s a big deal.”