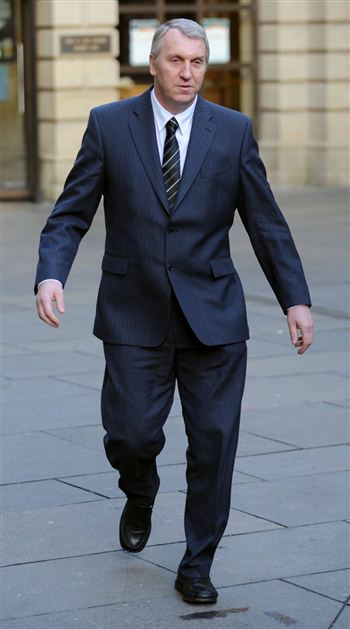 A GYMNASTICS coach marked his star teenage pupil’s menstrual cycle on his calendar during a four-year campaign of sexual abuse, a court has heard.

Mitchell Dolphin, 51, kept notes of the young girl’s periods and even asked her mum if he could adopt her, it was claimed.

Mr Dolphin denies 22 charges of lewd and libidinous behaviour and sexual assaults on 14 girls and a boy who he trained at the gymnasium he ran in Loanhead, Midlothian between April 1986 and last year.

Giving evidence at his trial at Edinburgh Sheriff Court yesterday (Thursday) a girl who Mr Dolphin trained said he bought her gym equipment and took her to his home alone after sessions.

She said he would lay with her on his couch and move her against him and kiss her neck, as well as forcing her to sit on his knee while he drove her to competitions.

The girl – who was aged between 11 and 15 when she trained with Mr Dolphin at the LO-GY Centre – said she did not like the way he touched her but felt unable to stop him.

Now 27 years old, she said at the time her mum complained about Mr Dolphin’s behaviour to the Scottish Gymnastics Association but the complaint was withdrawn so she could return to training.

She said the complaint came after years of touching escalated to the point where Mr Dolphin was keeping track of her development into puberty having her first period.

The girl – who cannot be named for legal reasons – said: “I was actually on my way to gymnastics squad so I had to tell Mitch because I did not want to go to squad. I had never experienced it before and I was worried I would bleed through my shorts.

“Mitch knew when your period was coming, he knew the symptoms and would comment on you being lethargic in training.

“He had it in his calendar. I didn’t like it.

“He would say you were due it when this competition is on so we will back off on the training.”

The girl also said Mr Dolphin would feel her breasts and comment on them getting bigger. She said he asked her to start wearing a bra when she was around 13 or 14 years old.

She said: “He would just tell me they were getting bigger. Say ‘you’re developing,’ things like that.

The hairdresser said she had joined the gym in the early 90s when she was 11 years old.

She said Mr Dolphin almost immediately singled her out for special attention and she was teased by the other girls over him cuddling her.

The girl said Mr Dolphin had spotted potential in her and trained her with a view to competing at the 1998 Commonwealth Games in Kuala Lumpur.

However, she claimed, she felt uncomfortable by the way Dolphin was with her and said she felt as though he had “fallen in love” with her.

She said: “Mitch would touch your bum, he would cuddle you, he would not let you go. He would tell you to cuddle him.

“I can’t remember a time when it did not happen. He manipulated your brain so that you thought you had to cuddle him.

“He said I was his best cuddler.”

Dolphin and the girl developed a close bond, she said, as she grew in ability and he drove her around the country to competitions in a minibus he owned.

“I hated this – he would make you cuddle him from behind when he was driving, there would be a good 30 minutes when I would have to put my arms around him.”

Despite being upset by the way Mr Dolphin touched her, the girl said she thought it was normal and did not want to speak out against someone who had been a good coach.

And, with only a mother at home and money tight, Mr Dolphin would waive gym fees and buy equipment for the girl.

She added: “Mum paid as much as she could. Sometimes Mitch would pay for them (lessons). If my mum was late with payments or could not afford it, it would be swept under the carpet.”

Mr Dolphin also replaced a pair of £40 gymnastics slippers the girl lost and bought her a leotard, she said.

And at one point she claims he even asked her mother if he could adopt her.

She said: “Mitch approached my mum. She hated him.”

As time went on the girl’s gymnastics training increased and she said she was eventually spending four nights a week with Mr Dolphin.

She said her mum or her sister were often late picking her up he too her to his house to wait.

The girl said he lived alone and would make her lay on the couch with him. She also described how Mr Dolphin would tell her personal stories about his life and even broke down in tears in front of her.

She said: “By myself I hated it (going to Dolphin’s house). The telly would go on and he would just pull you back on to the couch and cuddle you.

“He would cuddle you from behind you or laying on top of him facing the telly. He would tickle your arms.

“He would move you about into different positions but not in a vigorous way, in a sneaky way. I know it was wrong, I did not want to and I did not like it but I could not say no.”

The girl said that a “couple of times” Mr Dolphin had been aroused when he was cuddling her and at times she could hear him heavy breathing.

She said he told her stories about his life and during a conversation about his own daughter, he broke down.

She said: “He was telling me about his daughter, he said he wished she was like me. He didn’t know where she was and hadn’t ever met her.

“I felt like an old man was in love. I felt like he was putting all this on to me. I didn’t know why he was telling me this, he was like a father figure but it got strange.”

The girl said it was after a night at Dolphin’s home that she broke down and told her mother she did not want to go back to gymnastics.

She said her mum made a complaint to the Scottish Gymnastics Association and she left the gym to start a career in hairdressing.

But, she said, she missed the gym and dropped the complaint to return before finally leaving for good around the age of 15.

It was revealed that Mr Dolphin had kept two cards and a letter which the girl sent him 12 years ago in which she apologises for leaving and letting him down.

The trial, before Sheriff Frank Crowe, is due to last four weeks.