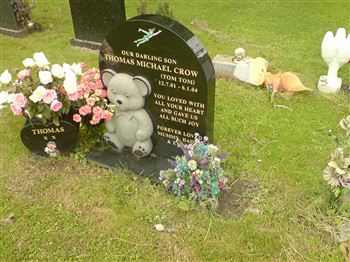 SICK thieves have stolen a cherished statue from the grave of a child who accidently strangled
himself on a window blind cord.

Little Thomas Crow, two, was found with the drawstring tangled around his neck in a horror accident in January 2004.

The youngster, who has a twin brother Ethan, was rushed to Dunfermline’s Queen Margaret Hospital but was declared dead shortly after arriving.

Now his parents, Michael and Nicola, from Dalgety Bay in Fife, are being forced to relive their agony after learning callous thieves have made off with a two and a half foot Peter Rabbit statue from their son’s graveside.

The despicable theft of the rabbit pushing a wheelbarrow took place between August 3 and 7 from the Fife town’s Hillend Cemetery.

An emotional Mrs Crow, 38, said: “We’re absolutely devastated someone could do such a thing. It was terrible for us at the time and this just adds to all the trauma.

“I don’t really want to talk about it anymore because it brings back such terrible memories.”

Fife Police believe the cruel-hearted thieves used a vehicle to make off with the treasured graveside memento because of its considerable weight.

Hillend Cemetery is an isolated plot of land located just outside Hillend village, near to Dalgety Bay.

A cemetery worker, who wished to remain anonymous, said: “I was working here last Wednesday when the young boy’s aunt informed us about the theft.

“She was really upset and was crying.

“It’s really quite disturbing that someone could just drive into a cemetery and steal from a child’s grave.

“What kind of world are we living in when people get up to that sort of thing. My heart really goes out to all the family concerned.” 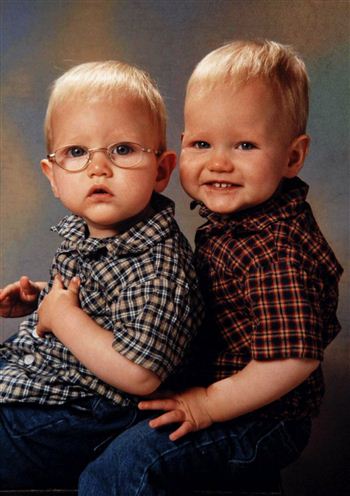 The blonde two-year-old boy, nicknamed Tom Tom, died in the freak accident as his twin brother lay sleeping nearby in 2004.

After finding their son hanging from the venetian blind drawstring his frantic parents tried in vain to revive little Thomas as they waited for the ambulance to arrive.

But he pronounced dead shortly after arrival at the Fife hospital.

Although the two boys were not identical they looked very alike and were said to be inseparable.

The distinctive Peter Rabbit statue is described as a concrete construction, about 2.5ft tall and pushing a wheelbarrow with honey brown coloured hat with ears sticking through the hat.

It was cemented on to a black and grey covered base about 6 inches high.

PC Dale Brown, the officer in charge of tracing the thieves, said: “The statue is unique and could only have been moved and taken away in a vehicle owing to its weight.

“This theft has brought untold distress to the family concerned and I would appeal to any member of the public who knows anything at all about this theft to come forward and contact us.”