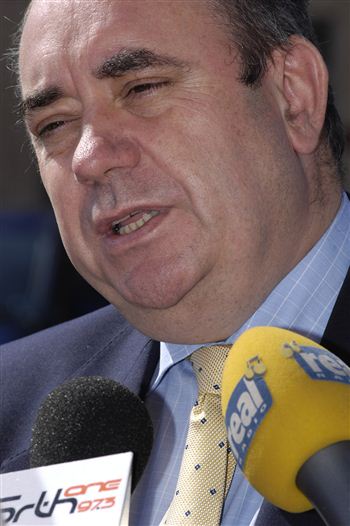 When asked yesterday if the Scottish Labour Party and others had been unduly politicising Justice Secretary Kenny MacAskill’s controversial decision to release the convicted terrorist, Salmond called their objections “daft.”

He said: “Some of the stuff the opposition parties have come out with is daft.

“Let’s say Kenny MacAskill decided to ignore the evidence from prison governors and medical experts saying Megrahi had three months to live, and he had been left to die in a Scottish prison.

“People would rightly have said: ‘Why couldn’t you have granted a compassionate release? Was it because you were frightened of making an unpopular decision? Did you bow to pressure from whatever quarter?’”

“Where would Scotland stand then?”

“We want to hold our heads up and say we made our decision on the principles of the Scottish legal system.

“We made a difficult and controversial decision for the right reasons.”

The Scottish Government came under unprecedented international pressure not to show mercy to al-Megrahi, who has been diagnosed with prostate cancer and reportedly has three months to live.

Heavyweight figures including US President Barack Obama and Hilary Clinton have spoken out, with President Obama yesterday labeling the decision to release al-Megrahi “a mistake”.

But First Minister Salmond rejected the notion that the bombers release had damaged Scotland’s international reputation.

He said: “Scotland’s international reputation has been enhanced.

“This is because people believe the decision was made for the right reasons in terms of the due process.

“We made it based on the precept and principles of the Scottish legal system.

“On that basis, our reputation will be enhanced by our ability to make a difficult decision and by having a system where punishment is a key part – as well as our ability to show mercy.

Al-Megrahi – convicted in January 2001 for the blowing up of Pan Am Flight 103 11 years eleven earlier – left Scotland after an eight-year spell in prison on Thursday afternoon.