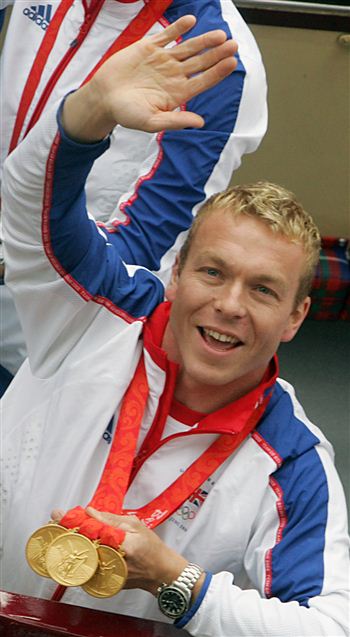 OLYMPIC hero Sir Chris Hoy has revealed how he uses rock music to get himself going for races.

Sir Chris – who took three gold medals in Beijing last year – said he is a big fan of rockers the Foo Fighters and their tunes “make his heart rate soar”.

And the 33-year-old, from Edinburgh, said that when he hears the same songs in other situations it transports him back to the races – giving him a surge of adrenalin.

Sir Chris said: “I have a playlist of songs that can help me get in a certain state of mind.“At the Athens Olympics, I was on the edge of being too anxious before the race so I listened to Massive Attack’s Angel to get in the right frame of mind.

“But there are some faster tracks that I can turn to as well. I’m a big fan of the Foo Fighters and some of their tracks instantly bring you back to the stages of the race.

“If you are driving along in your car and you have got the radio on it can be quite weird. You suddenly feel your heart rate soar.”

Sir Chris recently made a winning comeback to competition in France, following a horror accident which left him with a career threatening injury.

The quadruple gold medallist beat a top-quality field in Hyères to win the Fenioux Trophy, a sprinters’ competition based on three events.

Following the race he said: “I was a bit apprehensive before it, not because of the crash or the fear of that happening again, but just because I haven’t raced for so long. I’ve been training hard, but that’s completely different to racing.

“So I was asking myself a lot of questions, but I’m pretty chuffed to have won.”