Ex-Footballer escapes being struck off after assaulting mentally-ill patient 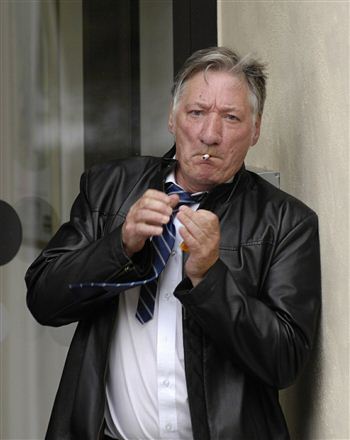 AN EX-PROFESSIONAL footballer has escaped being struck from the nursing register despite being found guilty of punching a mentally-ill care home patient so severely he was left “screaming in pain”.

James Lamb, 60, from Kirkintilloch, was working as a staff nurse at the Eastercroft House Care Home in Caldercruix near Airdrie, Lanarkshire, when he assaulted the male resident.

Lamb, who played professional football in Australia in the 1970s, was immediately dismissed from his position at the home and a subsequent employment tribunal also found against the nurse.

But, despite two eye-witness accounts of the attack, which one care assistant described as leaving the resident “screaming in pain”, Lamb was only handed a 12 month caution order by a conduct and competence committee of the Nursing and Midwifery Council in Edinburgh last week.

The resident who was assaulted was described as a tall, heavily built man in his late 50s, who had suffered a brain injury along with two strokes.

He also displayed psychotic behaviour at times and needed round-the-clock care to help him dress, wash and eat properly.

The tribunal heard Lamb – an experienced mental health nurse – was alerted to an incident in April 2007 involving two of his care assistants and Resident A, who has since passed away.

The resident – who had a history of inappropriate sexual behaviour towards staff – touched the breasts of care assistant Angela Tippet and acted aggressively towards her colleague Donald Murray.

Lamb – who was in charge of the care home unit at the time – was then summoned to the scene by Mr Murray.

When Lamb then tried to move the resident back into his room Mr Murray claimed the senior nurse punched the resident “five or six times” on the body.

Giving evidence, Mr Murray said: “Resident A opened his door and came out into the corridor.

“He came over and hit Angela’s breasts – that’s just the way he acted.

“I think he thought he was just playing about.”

“When Mr Lamb arrived he shouted at the resident to go to his room.

“As resident A went to get up to go, that was when I saw Mr Lamb punch him five or six times.

“I was shocked and amazed that it had happened.”

The stunned care assistant told a member of the nursing staff about the incident the following day and she subsequently informed the care home’s management.

A disciplinary meeting then took place on April 27 2007 and Lamb was subsequently dismissed.

The former nurse appealed the decision to sack him but an employment tribunal rejected his claim for unfair dismissal in 2008.

Angela Tippet – the care assistant who was also present during the alleged assault – told the tribunal the attack she witnessed left the resident “screaming in pain.”

She said: “I had just come on shift when resident A came out of his room and tried to strike my colleague Don Murray.

“I stepped in between them and Resident A hit me on the breasts.

“At that point he was being aggressive but he quickly calmed down.

“When Jim arrived the resident failed to go to his room when told to and it was then I saw Jim punch the resident in the side.

“He punched him three or four times in the lower part of his body.”

When asked to rate the strength of the punches on a scale of one to ten Miss Tippet said “about an eight”.

She added: “I didn’t know what to do afterwards as I was in shock. Resident A was screaming in pain when being struck.”

Lamb, who represented himself at the two-day NMC hearing, claimed Ms Tippet and Mr Murray were either mistaken in what they saw or were deliberately lying to get him into trouble.

He said: “I was at the nurse’s station when Mr Murray told me he and Angela had been hit by Resident A. When I got to the smoking room I asked the resident to go to his room.

“On the way he lifted his hands to me and I grabbed it and pushed him firmly in the back three times to get him back into his room.

“I did not punch the resident at any time. The incident happened so quickly a person could have mistaken the pushes for punches.

“I was in charge of the unit at the time and I made my decision based on the safety of the other residents.

“I admit I laid my hands on him, but only in a restraining manner. If any resident used violence I was trained to use minimum force and that is what I used.”

The senior nurse also claimed to have an excellent rapport with Resident A and if he had struck the resident as firmly as the witnesses testified there would have been visible marks on his body.

Lamb, who had a 25-year unblemished nursing career record, added: “I don’t understand why they have made these claims about me and Resident A. They are telling you what they thought they saw, but it all happened so quickly.

“Their interpretation of what happened that day is totally different from each others and from mine.”

In finding Lamb guilty of the assault charge, and ordering a 12 month caution order to be placed on the dad-of-two, the panel stated: “The panel finds the facts proved in the balance of all probability.

“We heard testimony from two witnesses, who both have extensive careers within the health service, and we have no reason to see why those witnesses would lie.

“This has been a very difficult case to prove, but we do not accept the respondent’s version of events. Striking a patient with a closed fist contravenes several areas of the NMC code.

“Resident A was a vulnerable adult in your care and your response compromised the safety and dignity of your patient.

“After long deliberation, we have decided a 12 month caution order is the appropriate sanction.”