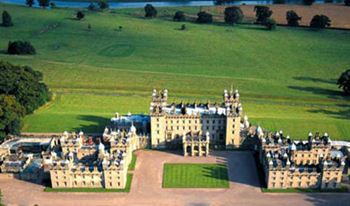 A member of staff at Floors Castle in Kelso – home of the Duke of Roxburghe – raised the alarm after discovering the fire in a private living room and immediately evacuated the building at 7.30am yesterday (Wednesday) morning.

Fire crews arrived minutes later and entered the ‘severely smoke-logged building’ to determine the source of the fire.

The fire crew fought through the smoke and prevented the fire from spreading through the building – which could have caused millions of pounds in damage.It is thought that the fire was caused by an electrical fault from a freezer.

The Duke of Roxburghe – a former army officer with the Blues and Royals – was not home at the time, but returned to the castle later that day.

He said: “One of the house staff noticed the fire and immediately called the fire brigade.

“They were here within minutes and managed to contain the fire within in the room – we’re thankful it didn’t spread anywhere else.

“Everyone was evacuated the moment the fire was detected.

“The damage was limited, but there is damage to one wall and some effects of the smoke on the room above.

“We believe it was an electrical apparatus in the kitchen of the living room.

“The Duke was very concerned at first – but relieved that it had been dealt with so swiftly by the firefighters.

“We’ll be able to continue the day and be open to visitors – business as usual.”

A spokeswoman for Lothian and Borders Fire and Rescue said: “Eight firefighters with breathing apparatus entered the severely smoke-logged building shortly after arriving at the incident.

“They located and dealt with the fire on the ground floor of the four-floor building – which is thought to have been caused by a domestic freezer.”

Floors Castle was built in the 1720s and has been home to ten generations of the Roxburghe family.

The castle – which is said to be haunted – famously provided the inspiration for M.R. James’ ghost stories.