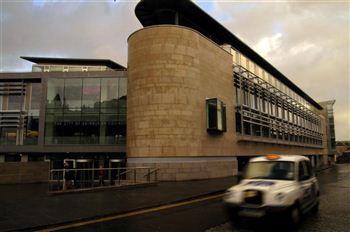 A SCOTS council is looking for hundreds of staff to start working from home or on the move – so it can axe 1000 desks.

The eco plan is from Edinburgh City Council which wants to improve its green credentials and help drive down rising costs.

The council wants to identify around 1,300 members of staff who they believe can work without the need for a desk.

And in the longer term, authority chiefs believe a third of their workforce – almost 6,500 staff – will be able to do their jobs without sitting at a permanent berth.

The city council intends to close the massive Chesser House, in the west of the city, by 2014, saving them at least £17 million over the next 10 years.

Unions have now called on the council to ensure decisions on which jobs would be suitable are made by people with experience of the roles, as opposed to external consultants.

Councillor Phil Wheeler, the council’s finance leader, said: “Work is not a place. It is what you do. These are ambitious plans by the council.

“Supported by new technology, new office layouts and different approaches to people management, over a third of our staff could adopt a more flexible approach to working, allowing us to deliver better customer service, make more efficient use of council premises and, crucially in these challenging economic times, to cut costs.”

The council conducted a recent evaluation of job roles of over 800 staff and found that 35 per cent of those quizzed could adopt “a new approach to working”.

It also found 62 per cent of staff spend time in talks with colleagues or customers, meaning mobile technology could be used more effectively.

At one council premises, Waverley Court, the average desk is used for only 58 per cent of the working day, while at Chesser House the average time spent at a desk drops to just 42 per cent.

But the proposed scheme has attracted criticism from some quarters with one sceptic saying the council should be focusing on finding other efficient ways of cutting costs.

John Stevenson, Unison’s branch president on the city council, said: “Other local authorities have tried to go down this route but found that many staff have problems with all wanting to access equipment at the same time.

“Our plea is to get people who know the jobs to decide what jobs would be suitable for – not external consultants.”

And Ron Hewitt, chief executive of the Edinburgh Chamber of Commerce, added: “I remember 10 years ago we were being told there would be no more big offices and that people will just use technology and meet up in cafes.

“To a certain extent, it happens but nowhere near the levels that were talked about.

“It is growing and it can be right in some jobs, but it is wrong to say that this is the new way of working.

“The council should probably focus on finding more efficiencies and using fewer people through natural wastage.”