TWO SCOTS explorers travelled by kayak to remote parts of Greenland on a mercy mission to deliver laptops to local children.

IT specialist Richard Smith, 37, and accountant Craig Mathieson, 40, from West Lothian, spent three and a half weeks kayaking around the wilderness to complete their mission.

It is part of an ambitious new project to link the remote Inuit communities with two primary schools in Scotland.

Paddling for up to 12 hours a day, the duo had to contend with the wildlife and even wilder weather.

Richard, from Uphall, said: “We had to make sure we weren’t too close to the icebergs as you could see bits falling off all the time.

“Every time we passed one our conversation would dip and we’d speak in hushed tones as if any noise we made could cause them to collapse.

“We once found ourselves in strong winds and thick fog going through two icebergs, which was quite scary.”

With polar bears prowling through the scenery the pair were lucky not to come face to face with the mammal, but said he and Craig, from Bo’ness, did have a few near misses.

Richard explained: “We didn’t have any live encounters with polar bears but did find a large print near our tent one morning after we woke up.

“It didn’t stop us from sleeping with the rifle, though.

“Even at that, a dozen polar bears could have come into our tent and we wouldn’t have noticed because we were so exhausted.”

The laptops, paid through fundraising by the pair, will allow the remote communities to connect with Castleview Primary in Edinburgh and Deanburn Primary in Bo’ness through the internet. 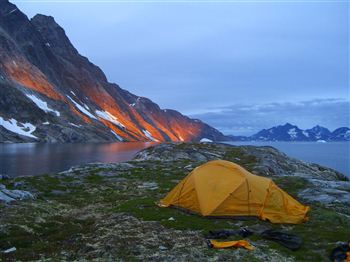 The aim of the Northern Lights Expedition is to allow both groups to share their cultures and experiences with each other, as well as highlight the effects of climate change on the indigenous population.

The trip ran from August 1 to August 21 with the a return trip in April next year involving a cultural exchange, with small groups of children from each country going to visit each other.

Richard said: “We achieved our aims this time and next time we would like to take the Scottish children on mini expeditions being pulled across the ice by dogs and experience other aspects of the Inuit culture.

“And we would like to take the Inuit children to Deep Sea World and show them that while they eat seals, we try and save them.

“It will be interesting for both sides.”

Both men describe themselves as explorers and would like to extend the project to other remote areas in the future, such as Northern Siberia.