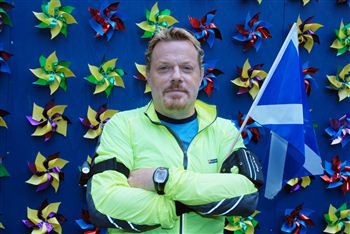 TRANSVESTITE comic legend Eddie Izzard arrived in Edinburgh yesterday after a gruelling 26 marathons in a row – the equivalent of London to Milan.

But Marathon man Eddie – who has run over 1600 miles to raise money for Sports Relief – still has 17 full marathons to go until the finish line.

The 47-year-old, who only trained for a month before attempting the crazy feat – gave himself a rest yesterday – by only running up the steep side of Arthur’s Seat.

He admits that his journey been taken him though the pain barrier – about 26 times.He said: “It’s a bit like when you run out of petrol in a Mini, and you stick a bit in to try and keep it going.

“I keep pulling different muscles, I think they’re taking it in turns or something – it seems to be one at a time.

“You get terrible blisters all over your feet, but I’ve found that they heal as you run – that and peeing on them, which is supposed to work.

“My feet have become quite monster-like.

“And I’ve heard that your nipples fall off doing this kind of thing – but I can tell you that my nipples are fine.

“I don’t know if I’ve lost that much weight, I think it’s all muscle now and I’ve certainly tightened up quite a bit – but my legs have always been good.

“But as an action transvestite I’m into adventure.”

To most it is a bit puzzling why someone would put themselves through such an ordeal – but Eddie reckons it’s worth the pain.

“It’s worth it – this is all raising money for Sport Relief.

“It funds projects like one I saw in Northern Ireland.

“They had midnight football for Protestant and Catholic kids to play together – to bring them together from different sides of the divide.

“They get to meet each other and everything.”

Eddie is no stranger to Edinburgh, having done stand-up comedy in the city for 12 years.

While he was a student in Sheffield he came to Edinburgh to perform at small venues at the comedy festival.

He said: “I was hitching up to the Festival from Sheffield – I think when I first arrived a was a bit dazzled by the bright lights of the Bank of Scotland on the Mound and everything.

“I did 12 years here, but I think I only enjoyed the last three years.

“By my second year I knew it was going somewhere and I focused like a laser – I was very controlled.

“I think the city is great, but the competition is very intense – if you’re a comedian the Edinburgh Festival it’s a bit like Death Race 2000.”