A YOB branded “Scotland’s worst teenager” has been ordered to go to boot camp. 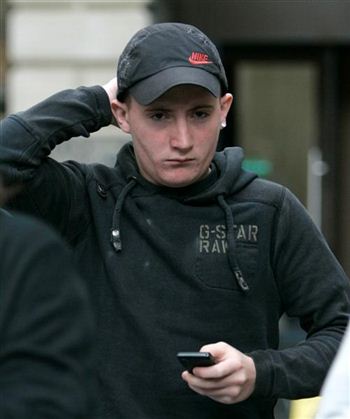 Gavin Inkster, 19, got an ASBO banning him from the whole of Midlothian after terrorising his neighbours by breaking into houses and stealing cars.

But less than a week after getting Scotland’s first ever county-wide ban, Inkster was caught driving his mum’s car while disqualified and uninsured.

Today (Wed) in court he also admitted breaking bail orders having strayed into Dalkeith, Midlothian, on at least two occasions after picking up the ASBO.

His own lawyer described him as “very foolish”, while Sheriff Kathrine Mackie blasted him as “someone totally out of control.”

He will now be sent to an intensive three-week residential course at Venture Trust in Ross-shire, where young offenders are urged to change their ways.

Inkster, a former binman who has been living with his girlfriend after being booted out of his family home, will be heading to the Highland offenders camp having broken his 8am to 8pm curfew.

The Midlothian-wide ban was imposed at the start of August.

But it took just a matter of days for Inkster to land himself in trouble again, Edinburgh Sheriff Court heard.

Police visited his Musselburgh home on August 18 but could not find him.

They returned the following day, but again he was nowhere to be found.

In fact, Inkster had been out driving his mother’s car – despite being banned from the roads.

“These were very foolish actions, assisted by his mother. It was she who allowed him to drive.

“He was in his mum’s car and she was a passenger. She has had an operation on her leg last year and it was sore so she asked him to drive her somewhere.

“She knew that he didn’t have any insurance or a licence to drive.”

She said: “His mother must have known her son was disqualified from driving and at the very least known he wasn’t insured.

“I find that situation absolutely astonishing for a mum.

“Currently Mr Inkster doesn’t display any emotion to this in court – he is very passive.

“He shows a sullen expression.”

Referring to Midlothian Council’s failed attempt to ban Inkster from the county, Sheriff Mackie said a psychological report would now be needed to solve his problems.

She said: “While one must always take great care with these issues, the reports in the paper suggest he is someone totally out of control.

“He is simply on a spree.

“In the council’s probation progress report, the author suggests there is some kind of underlying problem with his behaviour.

“I don’t know. It is either that or he is just bad.

“That would suggest we are at the tip of an iceberg here.”

The Sheriff told Inkster that she expects him to have completed the three-week Venture Trust course in time for his sentencing in court in November.

He said: “His family come from the Woodburn area of Dalkeith and that is why he was coming into Midlothian, to see friends and family. He is one of a few notorious troublemakers there.

A police insider had also said: “I would say he was Scotland’s worst teenager.

“He may brag now and make out it’s a big joke, but he’d be knocked down a few pegs in prison.”

Midlothian Council previously claimed the case proved they were getting tough on antisocial behaviour.

They said: “The council will continue to utilise aspects of the antisocial behaviour act to ensure the safety of its residents.”