SCOTTISH Enterprise has come under fire for dishing out £30,000 to help a Scots paintball company run by a convicted fraudster. 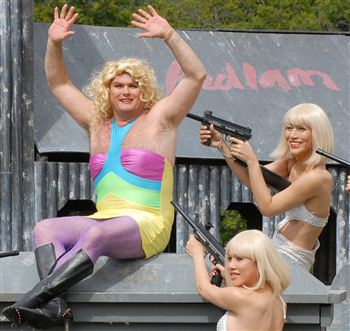 Edinburgh-based Bedlam Paintball got taxpayer-funded help to develop its “brand strategy” in 2007.

But there are calls for the quango to review its background checks after it emerged Bedlam’s owner Roman Rock, 49, was jailed for three years in 1997 for his part in a £100,000 credit card fraud.

Central Scotland MSP John Wilson said Scottish Enterprise had “failured to learn lessons from previous cases where it has given support to companies run by people with dubious backgrounds.”

But Rock, real name Jan, insisted he had turned his business dealings around since his prison spell for the scam.

He hit back at Wilson’s attack as “personal” and of “no relevance to the Bedlam Group.”

Bedlam was one of 2,000 Scottish firms taken under the wing of Scottish Enterprise as “account managed businesses” receiving taxpayer-funded help.

They used the cash for staff training and mentoring, and got two external consultants to help the firm expand.

A Scottish Enterprise spokesman said the advisers had cost the taxpayer around £15,000, part of a £30,000 investment in the company.

But MSP John Wilson says Rock’s “dubious background” should have been spotted sooner.

The paintball guru was put behind bars for making false transactions with a stolen credit card, putting £53,295 into a company account.

He was also found guilty of further frauds totalling £49,835.

He was a director of Bedlam War Games before the court case, but transformed his business’s image after his release.

Camouflage and war themes were ditched in favour of a spy-game approach, in a bid to give paintball a broader appeal.

Rock claims Bedlam’s transformation has been a success, and he was even recently hailed by the Business Gateway as an example of someone who had benefited from government support.

But Central Scotland MSP John Wilson, who has previously been critical of Scottish Enterprise, said the agency “should not only be scrutinising the companies that receive taxpayer-funded help, but also the history of the directors”.

He told a weekend interview: “This further highlights the quango’s failure to learn lessons from previous cases where it has given support to companies run by people with dubious backgrounds.”

But Rock hit back, saying: “This conviction is historical, was personal, and as such has no relevance to the Bedlam Group.

“It has only been through the support it has received from Scottish Enterprise that Bedlam has been able to grow its turnover from £500,000 several years ago to £1million today, creating jobs in the process.”

A Scottish Enterprise spokesman said: “The support provided to Bedlam Paintball over the past two years has been directly related to improving the company’s performance and helping to develop its business.

“There are strong systems in place for checking SE funds are spent only on the specific project activity we agree to support.”