FAST food clown Ronald McDonald has been slated by scientists for conning kids into believing Pluto is still a planet. 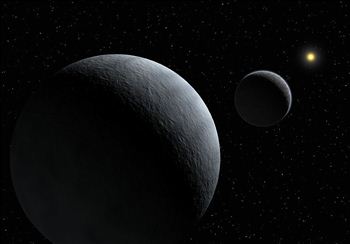 The tiny space rock was officially judged to be too small to qualify as a planet three years ago.

But space geeks have spotted a recent batch of McDonald’s Happy Meal boxes still stating: “There are nine planets in total.”

Members of the 10,000-strong IAU took over two years debating how many planets were in the solar system.

And in August 2006 it was declared that the scientific community should now regard Pluto as merely a “dwarf planet.”

But a batch of “fact”-filled McDonald’s Happy Meal boxes offer a different opinion.

They say: “The Solar System is made up of all the planets that orbit our Sun. There are 9 planets in total.”

The editor-in-chief of the Encyclopedia of Astronomy and Astrophysics said: “McDonald’s have got this wrong.

“It’s a shame they didn’t check their facts.”

A spokesperson for the fast food firm said: “We are aware of the debate about Pluto.”