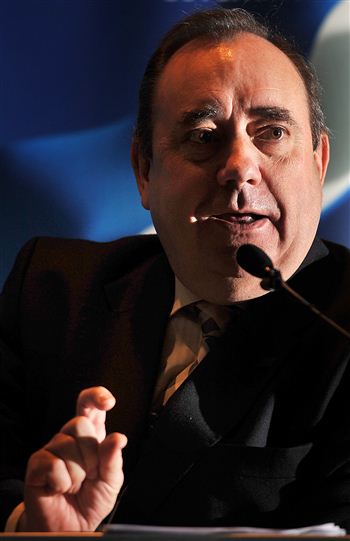 ALEX Salmond has snubbed an offer from David Cameron to discuss devolution under a Tory government.

The Conservative leader had wished to hold early talks to discuss how relations could be improved between the Scottish Government and Westminster – but the offer was rejected by the SNP leader.

A spokesman for the nationalist first minister slammed Cameron for taking next year’s election for granted, saying, “David Cameron is strutting around like he is already the Prime Minister.”

“We will meet with and work with whoever is prime minister in the best interests of Scotland -but let’s see what happens.”

The spokesman went on to say, “the priority is electing a big block of SNP MPs to make Westminster dance to a Scottish jig.”David Cameron proposed early talks with the Scottish National Party in an interview with the Scottish Sun last week.

And the Tory leader pledged to come to Scotland every year to address MSPs and ministers and answer questions on the budget.

Cameron appealed to Scottish voters, saying: “I would come to Scotland even before the election and meet with the First Minister and see how we can work together to build a better future for you.

“This is my guarantee – a Conservative government in Westminster would govern Scotland with the respect it deserves.”

He also said that the Conservatives could win over voters in Scotland by focusing “mutual respect”, adding that Westminster and Holyrood could work closer together on solving problems rather than going head-to-head.

The Sun newspaper’s English editions last week announced that they were ditching support for Labour in favour of the Conservative party, which is currently riding high in the polls.

However the Scottish Sun is yet to back a political party in Scotland.

PREVIEW – All singing, all dancing politics: A Very Brexit Musical

Farage and Clegg will be seen as most untrustworthy in TV debates, study says