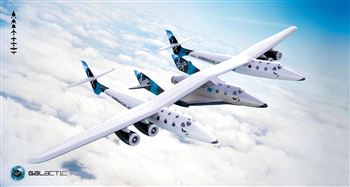 The Scots-born boss, who heads-up Virgin’s space tourism arm for Richard Branson, said that he didn’t know how much was on offer, but that money was clearly no object.

The 49-year-old said: “We hot approached by someone who turned out to be a porn-film maker who wanted to hire the whole ship.

“They wanted to make a sex movie in space.

Each place on SpaceShipTwo – which must be launched into the atmosphere by its powerful carrier WhiteKnightTwo – costs £120,000 per seat.

With six passenger seats on the spacecraft, the production would have brought the costs to a massive £720,000, making it one of the most expensive adult films to date.

The flights are expected to commence in 2011, have already had a lot of interest from enthusiasts, including X-Men director Bryan Singer, physicist Stephen Hawking, F1 legends Michael Schumacher and Rubens Barrichello and Top Gear presenters Richard Hammond and Jeremy Clarkson.

Speaking in an interview over the weekend, Whitehorn added that Scotland was among the final two sites being considered for the Virgin Galactic launch base.

He said that RAF Lossiemouth is considered to be an ideal site, because of its huge runway and its closed airspace for Tornado training.

He added: “When we first started the project everyone thought it was a joke… and now the skepticism has begun to fall away as we start to begin flying the prototype technology.

“We get a lot of crackpot solutions to problems at the moment but the real solutions are technology.”