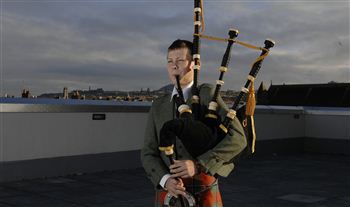 Connor Sinclair, 13, has been appointed the official piper to the First Minister after winning a host of top awards for his piping skills.

And Bahamas-based screen legend Connery has asked Connor, who attends The City of Edinburgh Music School at Broughton High School, to be his official piper for his next visit to Scotland.

The burly former James Bond asked the youngster, who travels every day to the Edinburgh school from his home in Crieff in Perthshire, to accompany him after hearing him perform in the Black Watch play during the Edinburgh Festival.

“Piping is great fun and keeps you fit. Most of my friends are into football, but I prefer piping and practice for around an hour each night when I come home from school.

“I’ve chatted to Sir Sean a couple of times and I think it’s quite cool.

“I get a phone now and again asking me to play for him. I don’t play anything specific for him, just whatever comes into my head.”

Connor, who is planning to study for a piping degree at the prestigious Royal Scottish Academy of Music and Drama, has won numerous awards, including first prize at the Royal National Mod 2009.

And after impressing the First Minister and Sir Sean, he is now tipped as one of the most promising pipers in the world.

First Minister Alex Salmond said: “Connor is a wonderful young talent, with an array of successes in his first few years of competition, and a fantastic career ahead.

“It is a tribute to Connor’s enthusiasm for his music that he always answers the call to pipe guests into functions at the Castle and elsewhere – and he is always the star of the show.”

Tudor Morris, Connor’s teacher at the City of Edinburgh Music School, said that the youngster at first had kept quiet about his star contacts, and that he had to found out eventually from the boy’s parents.

Mr Morris said: “Like most 13-year-old boys, we have to drag information out of him by force, but luckily his parents keep us updated and tell us about these things.

“This is a one-off – I don’t think politicians have official trombonists or violin players, it’s just something Alex Salmond wanted to do.

“I suppose it looks good for him to have a young, confident piper and he has been very supportive.

“Connor is very committed to playing the pipes and is a very motivated and hard working piper – he’ll go on to be one of the best pipers in the country.”

He added: “We have never had Sean Connery in the school, which is a shame, but he’s always welcome.”