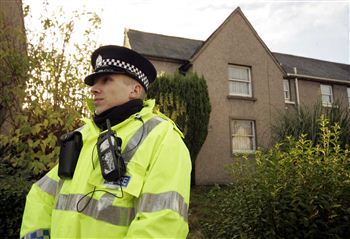 POLICE were last night carrying out a post mortem to try and establish how a pensioner died – amid fears his body could have been left lying in his council home for weeks.

The body of William Lynn, 70, was finally found by officers who entered his house in the Clermiston area of Edinburgh after being tipped off by worried council workers.

They couldn’t get in touch with him over months of unpaid rent and called in officers to investigate.

Lothian and Borders Police would last night say only that the circumstances surrounding his death remained “unexplained”.

However neighbours said the pensioner himself had not been seen in public for around two months.

Police confirmed they had spoken to the son following the find, however said they could not comment further while inquiries were ongoing.

The alarm was finally raised when a housing officer from Edinburgh City Council was unable to get in touch with the pensioner and got no answer at the property.

Neighbours in the quiet residential street said that the pair were “reclusive” and that it was normal for them to go days without seeing any sign of life at the house in Parkgrove Terrace.

Mr Lynn’s immediate neighbour, who did not want to be named, said that she had seen Andrew walking his father’s greyhound around two weeks ago.

She said: “The last time we saw Andrew was at night when we were coming home. He was coming out of the house with the dog but turned around and went back in when he saw us.

“The last we saw of Billy must have been around two or three months ago now.

“But that wasn’t unusual. They were both quite reclusive and we never saw them or spoke to them.

“Our families were friendly when the kids were younger but in the last few years it’s just been a case of saying hello in the street.”

A few doors down, neighbour Peter Lockhart said that Mr Lynn’s health had “gone downhill” since his wife’s death 15 years ago.

The 72-year-old said: “Billy had lived here a long time, he was here when I moved here in 1962. I used to work with his wife Diana at the Burtons Biscuits factory.

“When she died that’s when he started to kept to himself more. I think his health went a bit downhill as well.

“But he always seemed well enough for a man of his age – he had shakes down one side of his body but he was still out walking the dog.

“Last time I saw Billy was about two months ago. I’ve seen his son about since then, perhaps three weeks after that.

“He loved his dogs – he used to have two, a black one and a grey one, but the black one barked a lot and made a lot of noise and neighbours complained so he had to get rid of it.

“He walked the dog really early in the morning. I was up a couple of times at about 5am and saw him going down the road with the dog.

“The police took it away on Tuesday when they came round.”

Police set up a command unit in the street and carried out door to door inquiries yesterday.

It was understood they are not looking for anyone else in connection with Mr Lynn’s death.

A police spokesperson said: “Police are investigating after the body of a 70-year-old man was found in Parkgrove Terrace, Edinburgh on Tuesday morning.

“At this stage the death is being treated as unexplained, with enquiries into the circumstances surrounding the man’s death at a very early stage.”

Meanwhile the discovery has caused distress among the residents of the street.

One neighbour living across the street from Mr Lynn, who did not want to be named, said: “I just know Mr Lynn has died but there must be something suspicious about it or the police wouldn’t be here.

“It’s very quiet round here which is why everyone is surprised as what has happened.”

A spokesman for Edinburgh City Council confirmed that their staff had raised the alarm.

They said: “One of our housing officers became concerned when they visited the home of a tenant and raised the alarm with the police, who are now investigating the death.”