SUSAN Boyle was all smiles during a flying visit back home to Blackburn today (Thurs) as bookies announced they were refusing to take any bets on her album reaching number one next week.

Bookmakers William Hill said they were “one hundred per cent certain” that the 48-year-old’s debut would top the charts after canvassing retailers the length and breadth of the UK.

And they have also tipped her as a favourite for the Christmas number one in the album charts – expecting her to beat Leona Lewis and even the Pope to the top spot.

Asked if she was excited about the prospect of bagging her first number one album, SuBo grinned broadly and gave the thumbs up, before waving goodbye.

With odds of 6/4 on the Britain’s Got Talent star having a very merry festive season, she is streets ahead of another reality TV favourite Leona Lewis – who lags behind at 13/8.

But Rupert Adams, Susan Boyle expert at the bookies, said that there was outside chance she could be piped to the post by her spiritual leader who has been given odds of 16/1.

Mr Adams said: “We are refusing to give any odds or take bets on SuBo being number one in next week’s album chart because we are 100 per cent certain that she will be.

“I spoke to HMV yesterday and they are expecting the album to fly off the shelves.”

Shops are bracing themselves for a rush of customers as the debut album hits the shops next week.

The nearest stockist to her hometown has already had locals asking when the record will be in stock.

And HMV stores in the capital are expecting boxes of CDs to arrive at the weekend to fill their stockrooms in time for Monday’s release date.

Entitled ‘I Dreamed a Dream’, the album topped the Amazon bestseller chart in September – three months before its release.

And it was announced just yesterday (Weds) that it is the biggest selling pre-order record in Amazon’s history.

The 48-year-old spinster captured hearts around the world when she belted out ‘I Dreamed a Dream’ from Les Miserables on Britain’s Got Talent in April.

She became an overnight sensation, racking up millions of views on YouTube and staring on TV shows around the world, including Oprah. 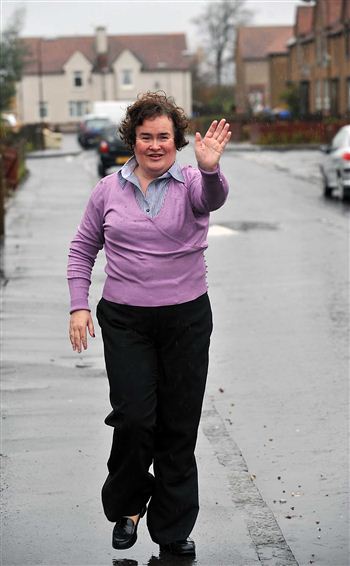 Her world-wide fame was cemented when news of her debut album came out and fans rushed to pre-order their copy.

And the hysteria has led the manager of WH Smith’s in Bathgate – the nearest shop to Boyle’s house that will be selling the album – to expect a “rush” on Monday.

She said that customers had already been asking when the CD would be out and if they would be stocking it.

She added: “I’m definitely expecting a few people in on Monday. I’ve already had people asking about when they can get it.”

And the Assistant Manager at HMV in Ocean Terminal in Edinburgh said that the CDs were expected in over the weekend.

Martin said: “We’ll be getting them in a couple of days before hand to make sure we’ve got enough for Monday. I’m not sure if there will be a rush, but we’ve already had people enquiring about the album.

“We’ll have to wait and see what Monday brings.”

Amazon announced Susan’s pre-order achievement earlier this week, saying that it was “testament” to her talents.

Julian Monaghan, head of music buying at Amazon.co.uk, said: “Just eight months ago, no one was aware of the talents of Susan Boyle. Now, she has generated more Amazon pre-order CD sales globally than any other artist.

“That is an incredible achievement and is testament to the fact that she has captured the hearts of people all over Britain, America and the rest of the world.”

And her record label, Columbia Records, said that Susan had an ability to “touch” people.

Steve Barnett, chairman of Columbia Records, said: “One of the things that is so unique about Susan Boyle is her ability to touch people around the world.

“We’re excited that ‘I Dreamed a Dream’ holds the new record for global pre-orders and that Amazon’s customers have supported her album in this way.”