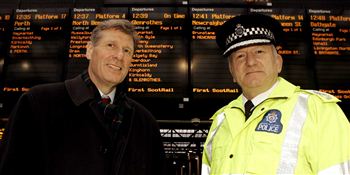 ONE OF Scotland’s prisons is shutting down for Christmas as record numbers of inmates go home for the festive holiday.

Noranside – one of Scotland’s two open prisons – will empty as almost 200 prisoners qualify for the holiday week.

And those who aren’t given the time away from jail will be shipped 30 miles down to Castle Huntly on the outskirts of Dundee.

Whilst the Scottish Prison Service said that it was a cost-cutting measure, it has attracted criticism for the prison bosses and Justice Secretary Kenny MacAskill.

Questions have been raised about the safety of the Scottish public if the prisoners – many serving life sentences – are let out.Bill Aitken, the justice spokesman for the Scottish Conservatives, said it was just another example of “soft-touch Scotland”.

He said: “This is soft-touch Scotland personified. It used to be that prison meant punishment. Now it is so cushy as to be beyond belief.

“While I recognise the potential cost savings of allowing prisoners to go home, I wonder how many of those released will get themselves into trouble over the festive season.”

One of Scotland’s most notorious killers, Thomas McCulloch, was moved to Noranside earlier this year.

He broke out of State Hospital at Carstairs in 1976 with fellow murdered Robert Mone and killed three people including a 27-year-old police officer.

After this he was branded a dangerous psychopath and told he would die behind bars.

The Angus jail was blasted six months ago when it was revealed that 18 prisoners walked free from there and Castle Huntly – including three killers.

A spokesman for the Scottish Prison Service said that numbers being allowed home this year were still being finalised, and that any closure would save money.

He said: “There are only about 250 of them in the open estate.

“If most of them are eligible, then they will be released for a home leave at Christmas. Some will be moved from Noranside to Castle Huntly and then Noranside will be shut down.”