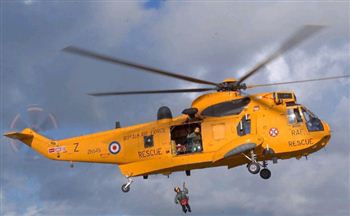 A TEENAGE girl is tonight in hospital after flipping over her bike handlebars and plunging 90-feet down a gorge.

The 16-year-old high school pupil was airlifted to hospital by RAF helicopter after a biking trip in Perthshire went wrong.

A brave local GP managed to reach the bottom of the gorge, where the girl was left lying with stomach injuries for up to an hour-and-a-half.

Rescuers said the pupil from Menzieshill High School in Dundee was “very lucky” to survive.

She had been on an Ancrum Outdoor Centre trip at Rumbling Bridge, in Dunkeld, Perthshire yesterday (Wednesday).
The centre has been dogged by similar incidents in recent years.

Two fire fighters, a paramedic and a spine-board were lowered down the gorge using cables to help the teenager until she could be rescued, at around 1pm.

A winchman from RAF Leuchars Search and Rescue team was then lowered into the gorge to secure the girl, before she was taken to Ninewells Hospital in Dundee.

A spokesman for the Scottish Ambulance Service said: “The patient was conscious and breathing, and suffering from cuts and bruises and complaining of stomach pains when rescue units found her.

“The hospital will do checks to see if any internal damage was caused, but she is very lucky not to have received more serious injuries from a 90-foot fall.”

The Ancrum Outdoor Centre was temporarily closed in October 2007 while the local authority and the Marine and Coastguard Agency investigated reports of youngsters ‘tombstoning’ off the Arbroath Cliffs into the sea.

One incident expert at the time described the activities as “an accident waiting to happen”.

In 2004 two youth leaders were charged with culpable and reckless conduct after an incident in August of that year.

But prosecutors dropped the charges in August 2005 after further investigation.

A Dundee City Council spokesman said the incident would be investigated.

“Everyone at Menzieshill High School and the education department wishes this pupil a full and speedy recovery from her fall.

“Her family were alerted as soon as possible after the accident and we will be keeping in close touch with them during her recovery.

“When the accident happened a group of pupils from the school was taking part in a fully supervised outdoor activity.

“The route they were taking has been used many times in the past by pupils on similar supervised cycling activities.

“We will co-operate fully with any external investigation and will also be carrying out our own assessment of the situation.”