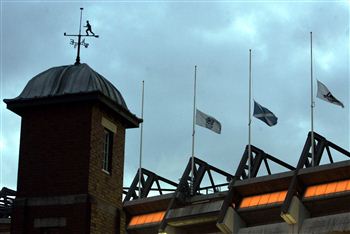 RUGBY fans could be in for travel chaos after rail workers voted to strike on the same day as England and Scotland’s Calcutta Cup showdown.

Over 550 First Scotrail guards, drivers and sleeper-train managers will strike on the Murrayfield match-day over staff cuts on the new Airdie to Bathgate line.

The 24-hour walk-outs will affect trains on three occasions over the next four weeks.

The final strike on March 13 lands on the same day that over 65,000 rugby fans descend on Edinburgh’s West End for the biggest game in the RBS Six Nations tournament.

Angry Scotrail bosses hit out at the RMT union’s “cynical and incomprehensible” decision to take industrial action on one of Scotland’s major sporting days.

Both the Scottish Rugby Union and the Scottish Government said they hoped the dispute would not disrupt rugby fans’ travel plans.

The strikes, also planned for February 20 and March 1, were confirmed after a ballot for action against plans to impose driver-only operation on the new Airdrie-Bathgate line.

RMT members fear that staffing trains with just two members of staff will compromise safety on the new line, due to open in December.

Their chief, Bob Crowe, pleaded for understanding from passengers during the strikes.

He said: “This overwhelming vote shows just how angry RMT members are that a company that gave its shareholders £18 million last year is prepared to reduce safety standards for the sake of just £300,000.

“We know that downgrading guards’ safety duties on the Airdrie-Bathgate line is the thin end of the wedge, and we have already exposed Scotrail’s systematic breach of its contractual obligation to run trains with at least two staff members aboard.

“Scotrail’s scandalous attitude to safety is underlined by its shabby attempts to put together an inadequately trained scab army rather than accept that it has lost both the economic and safety arguments to keep the guard in charge.

“I hope that rail users in Scotland will understand that we are making a stand for their safety as well as our members’, and join with us in demanding that the Scottish government steps in to stop First Scotrail putting cash before safety.”

“No intention of spoiling anyone’s day”

But the train firm slammed the RMT’s safety fears as “nonsense,” adding that replacement busses will run on routes where trains cannot be provided.

Responding to the claim they were putting cash before safety, a First Scotrail spokesman said: “That’s nonsense.

“The system is safe and has run for more than 25 years.

“And the new services are subsidised, paid for by the Scottish Government – so the payment to ScotRail for running them will reflect only the costs of doing so.

“It is not only cynical but incomprehensible that the RMT has chosen to strike on one of Scotland’s biggest sporting days.

“However, we have no intention of spoiling anyone’s day and will keep Scotland’s railway running.”

The SRU said they could only hope rugby fans’ plans would not be affected.

A spokesman said: “Scottish Rugby hopes that supporters wishing to travel to the Calcutta Cup match between Scotland and England at Murrayfield on Saturday 13 March will not be inconvenienced.”

A Scottish Government spokesperson added: “It is in the best interests of passengers that both sides should come together to resolve this issue as quickly as possible.”

Lothian and Borders Police said the match-day strike was not a policing issue at present.