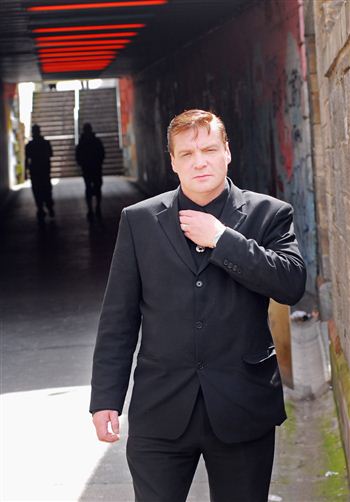 FORMER Death Row Scot Kenny Richey has told relatives he fears he is dying – and will never get the chance to re-marry his sweetheart back in Scotland as planned.

The Edinburgh-born 45-year-old – who was released from jail two years ago – has a history of heart problems and says he now has to use an oxygen bottle just to help him breathe.

In a letter to his brother Tam Richey, himself serving a 65-year stretch in a US jail for murder, Kenny said he has been forced to postpone remarrying his ex-wife Wendy Amerud and fears losing the home he shares with her in America.

Richey wrote: “The doctors haven’t told me anything different, but I feel like I am dying.

“Every day I feel more exhausted and it’s getting harder to breathe.

“I have to use an oxygen bottle now.

“Death is plaguing my mind and dying is always in my thoughts.”

He added; “I wanted to come back to Scotland to marry Wendy, but now that doesn’t seem possible.

“We couldn’t afford it anyway and with the mortgage repayments it’s looking like we may lose the house.”

Richey is currently free on bail after being charged with assaulting his own son Sean, 23, with a baseball bat in the family home in Minnesota last month.

Sean moved out of the house and has been staying with a girlfriend since the January 6 bust up.

And Kenny claimed his son had visited him only recently.

“But he’s not apologised for what happened – he still thinks it’s my fault.”

Richey added: “That night me and Sean were messing around wrestling. Then I put a choke hold on him and he didn’t like that and threw three punches.

“I threw a few back and he ran and got a steel baseball bat.

“He hit me in the arm with the bat then locked himself in his room.

“I broke through the door and punched him again.”

As part of his £1850 bail conditions Richey is banned from boozing or leaving the state, but he plans to plead not guilty at his trial this summer.

He was freed in January 2008 following 21 years on Death Row after being convicted of an arson attack in 1987 on a block of flats in Ohio in which a two year old Cynthia Collins died. He always protested his innocence.

Worried about being caged again, he said: “I know they’re going to try and get me as much prison time as they can.

“I’m expecting to receive two years if they find me guilty.

“I know the prosecutors in Ohio have been on the phone to Minnestota to hit me hard. They feel like I got away and they want me back inside.”

“I’ve done a lot of time, but it will be tough to go back to prison.

“The bail conditions mean I can’t leave the State or drink alcohol – that’s been difficult because I like my beer.”

Richey struggled to adapt to life back home in the UK, having several brushes with the law amid claims of assaults and theft.

He quit Scotland after making it back to America in time to see his father Jim die in April last year.

No court appearance for Kenny Richey