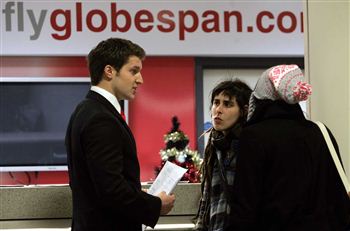 HUNDREDS of staff who lost their jobs when Scots airline Flyglobespan went bust will find out if they are entitled to any compensation next month.

Suppliers affected by the travel firm going out of business and thousands of customers will also learn if they are entitled to any cash.

Creditors acting for Flyglobespan announced yesterday that it will hold a meeting for all those who are attempting to claim against the collapsed firm.

Staff and creditors are to meet with administrators next month to discuss payouts from cash generated from the sale of the firm’s assets.

Around 650 employees at the discount airline lost their jobs when the firm went under in December, stranding thousands of passengers around the world.

Angry crews – many of whom had to sell their uniforms on eBay for cash – will vote on the action that administrators will take on behalf of the defunct firm at the Caledonian Hilton on March 23 in Edinburgh.

Hundreds of former employees, including check-in staff, air crews and pilots are already pursuing Flyglobespan through tribunals for unpaid wages.

Bruce Cartwright, joint administrator for the Globespan Group and a partner at PricewaterhouseCoopers, said: “The meetings will give us the opportunity to explain to the creditors both the scale of the administration and the progress we have made since our appointment on 17 December 2009.

“In advance of the meeting, creditors will receive a creditors’ report which will outline the next steps proposed by the administrators.

“As well as getting the opportunity to ask questions, this forum also gives creditors the chance to vote on the proposals, however, it is important to note that you don’t have to attend in person to vote.

“Any creditor wishing to participate but unable to come along on the day will be able to vote by proxy.”

The administrators will put the proceeds of the company’s assets into a pot once they are sold, then begin the process of dividing up the funds between the various parties.

Employees and companies that lost out from the demise of Flyglobespan will be awarded the proceeds from sold assets, as well as customers whose holidays were ruined by the cancelled flights.

According to Unite, the union that represents the airline’s ex-employees, many of the crews have been unable to fund work in the industry since Flyglobespan’s collapse.

Fiona Farmer, regional officer for Unite, said: “Unite is currently pursuing legal claims on behalf of hundreds of ex-Flyglobespan employees in respect of protective award and loss of wages.

“The collapsed has had a devastating blow for all of those employees.

“This is a very a difficult time for the aviation sector, especially in regard to those employees finding new jobs.

“We would hope that the sale of the assets would release funds, some of which can be given out to ex-employees, who have no received no monies that they were due from the company.”