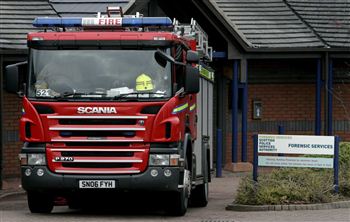 MSPs and legal experts have demanded to be told how many criminal cases will be delayed after a forensics lab was firebombed by organised criminals.

The Scottish Police Services Authority lab in Edinburgh was attacked in the early hours of Thursday morning by masked men, who detectives believe were attempting to destroy crucial forensic evidence.

The Edinburgh lab is one of just four in Scotland, carrying out 20 per cent of all forensic work and providing toxicology analysis for all eight Scottish police forces.

Although no evidence was lost from the attack, legal experts have warned that trials could be held up as a result of the delays that will be caused.

In a letter to Tom Nelson, head of forensics at the SPSA, Bill Aitken, justice spokesman for the Scottish Conservatives, asked how many cases would be disrupted by attack.

He said: “We need to know as quickly as possible the type of cases that might be affected.”

While Labour justice spokesman Richard Baker said: “They can ask other labs to take on the work but that will have a knock-on effect.

“If cases are taking a long time, that will put pressure on courts, witnesses and victims of crime.”

The attack on the lab, which is located in a quiet suburb of south Edinburgh, has highlighted the lack of security at SPSA sites.

Donald Finlay, one of Scotland’s top defence QCs, said: “The greater concern is the lack of security.

“People’s liberty could have been at risk. Evidence is important, not just to the prosecution but also to the defence.”

Jo Brigham, interim chief executive of SPSA, said: “The interruption to service will be temporary.

“The fire damage within our building has been relatively contained and did not directly impact on the laboratory rooms.

“However, if there are urgent and priority cases that need to be addressed we will look to move key work to another of our laboratories, or to outsource to another part of the UK if necessary.”

“Clearly to have a laboratory targeted in this way is a rare and unusual occurrence.

“Although the majority of our laboratory facilities in Scotland are located within police buildings and are not staffed 24 a day, we take the security implications of this seriously.

“That is why we have already taken steps to ensure that from today we will have 24-hour manned security at the Howdenhall site, and we will clearly be reviewing security implications for our other forensic facilities.”

On Friday SPSA sent letters to the Justice Committee at Holyrood, explaining that priority work would be outsourced if necessary.

The SPSA lab employs around 60 staff to carry out advanced forensic research, many of whom are now back at the lab and involved in the clean up.

Its experts’ primary role is in investigating crime scenes, covering everything from break-ins to murders.

Their specialists are able to analyse DNA and blood traces, and can track down criminals using just a paper tissue or a strand of hair.

They can also examine firearms to determine how they were used in a crime and can link them to the residue that is left on the skin or sleeve of a culprit when a gun is discharged.

The authority, which has a budget of nearly £100million, runs the police training academy at Tulliallan Castle in Fife, as well as providing intelligence and IT services for the police.

Lothian and Borders Police are now searching for the two men involved in the attack, which saw one masked man throw several incendiary devices through the ground floor windows of the building, before escaping in a getaway car driven by another man.