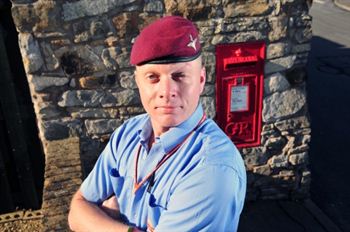 ROYAL Mail is urging the public to nominate their favourite local postie for first class service over the past year.

The organisation is searching for the unsung heroes of the public organisation, which delivers to the 2.5million addresses in Scotland.

And they have even included an award for bravery, which last year Scots postie Iain MacDonald was given for his service in Afghanistan.

The TA reservist from Fife was injured after an RPG exploded next to him but insisted on returning to the front line just 10 days later – with a shard of shrapnel embedded in his chest.

Iain was nominated by his colleagues for his commitment to the TA, but Royal Mail insists bullets don’t need to fly for the hard work of posties to be recognised.

Last year Hugh McBean from Nairn was the Scottish winner of the First Class People award for Community Involvement for providing emergency foster care for children with special needs and with family problems.

And Bonnyrigg postie Jim Ralston won the Charity Fundraising award for raising £80,000 towards building a school in Kenya.

A spokeswoman for Royal mail said that everyone who makes a nomination will be entered into a prize draw for £1000 holiday.

She added: “Remember it doesn’t matter if you don’t know the postman or woman’s name – we will be able to identify him or her from the delivery round if you give us the delivery address and postcode.”

Soldiers honoured for bravery in Afghanistan