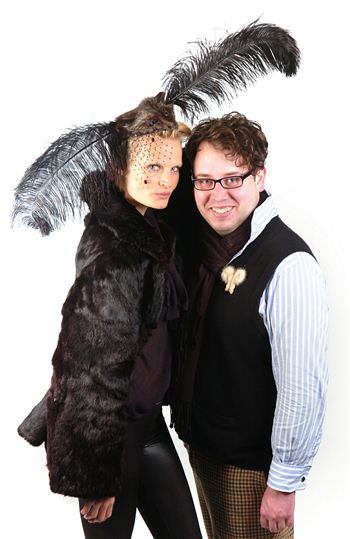 A SCOTS hat-maker is giving Johnny Depp a run for his money with his headwear made from roadkill.

And the wacky New Town milliner even gave a special wedding hat to his best pal made from a dead magpie.

The 27-year-old, who is currently studying at Telford College, is to display his gruesome collection of headwear made from feathers and furs of rabbits, foxes, pheasants, crows and peacocks at the city’s trendy Hawke and Hunter bar in May.

James’ mad business isn’t far removed from Depp’s character in the new adventure flick Alice in Wonderland, in which he plays a milliner who has gone mad from inhaling too much hatmaking glue.

James said: “It sounds very sinister, but I find it very satisfying to make something beautiful from something gruesome.

“It started when my friend wanted to buy a hat for her wedding.

“Without thinking, I said I’d make one, then I instantly panicked.

“One day I was walking along the road and I spotted a magpie in quite a sorry state.

“I knew that my friend’s dress was black and white so I thought it could work.

“I picked it up using a plastic bag and later used the wing feathers to make a hat.

“It sounds awful, but I cut off the wings with an axe.

“When I told her it was made of roadkill she was very shocked and said she had images of maggots falling off her head, but it went down a treat at the wedding.

“The bride even mentioned it during her vows – which sounds crazy.”

James, who is also interested in taxidermy and also makes clothing accessories out of the remains, admitted the practice took some getting used to at first.

He added: “It seemed a bit odd at first but I quickly got used to it.

“Usually I pluck or skin the animal, scrape off any fat and treat it with a salt solution.

“Essentially I feel like I am turning something sad into something quite stylish, and I think it’s good that the animal doesn’t just rot on the road.”