Sir Fred Goodwin pops out for a Good Friday lunch

HATED ex-RBS boss Sir Fred Goodwin swans through the Edinburgh sunshine after taking a half-day to scoff a slap-up meal.

He sauntered out of work with his new chums from RMJM Architects – the firm who gambled on the man widely blamed for the £20bn bailout of RBS. 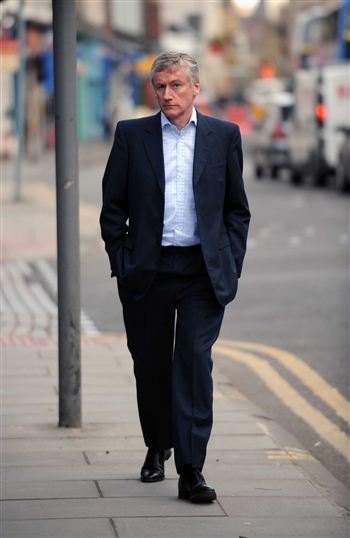 The 51 year-old spent his Good Friday loafing in a pizza restaurant with his new boss Peter Morrison.

The pair met through Morrison’s dad Fraser, who worked with Goodwin in his days as chief executive of Clydesdale Bank.

Goodwin appeared to have let his guard down in his home city for the first time since having his windows smashed 12 months ago.

Having returned from hiding in the French Riviera, Goodwin was sporting a tan and appeared “happy with life.”

“He had a tan, his jacket was off, his top button was undone and looked generally happy with life.

“The five of them sat around a round table away from the rest of the diners.

“It would have been fun to see who was footing the bill.”

The former RBS chief joined the firm as a consultant in January.

He is thought to have been attracted to the company for its links to the Middle East.

Goodwin and Morrison were joined for lunch by Nick Haston, the firm’s Middle East director.

They spent an hour and a half dining before heading back to the RMJM offices in the city’s Dean Village.

Local communities to pay for own speed guns