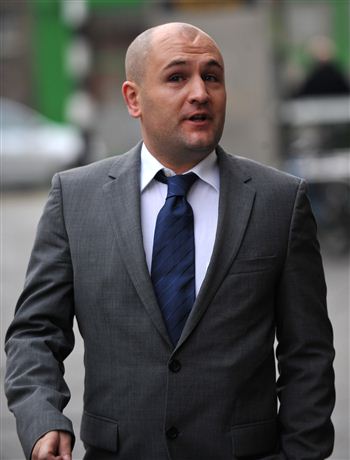 A DISGRACED police constable is to cash in on thousands of pounds of taxpayer’s money after being told he can keep his police pension despite being convicted of drug dealing.

Christopher McGinn, 30, from Pathhead in Midlothian, was jailed for more than two years last October after he was caught supplying cocaine by his own colleagues, abruptly ending his eight year career with Lothian and Borders Police.

But it emerged yesterday that he will still be able to claim thousands of pounds in pension cash despite his conviction – because it would most likely cost police bosses more to try and stop him.

The Lothian and Borders Police Board was asked by Chief Constable David Strang to determine whether they wished to go ahead with “forfeiture” procedures against the disgraced cop.

But after arguments from SNP Livingston councillor John Muir in favour of allowing the shamed officer to keep the cash, the Board voted eight to six to take “no action” to remove the benefit.

McGinn, who had been seconded to a drugs unit when he committed his crime, will now trouser around £4,000 a year when he turns 50.

Mr Muir argued that the former officer “had given good service prior to falling from grace” and had made o a “grievous error of judgement”.

He added: “The man made a horrendous decision, ended up in jail and lost his career.

“Whether he will be able to recover from that I don’t know.

“The question I have to ask is when is a sinner not a sinner, and when does that individual become rehabilitated and re-enter mainstream society?

“It was the worst case of double jeopardy that I’ve come across.

“Society was getting two bites at the cherry with this man.”

Councillor Muir, the vice convenor of the police board and a former police inspector with 30 years experience, added: “If we had gone forward with this and he had lost his pension, he could appeal.

“We would get legal aid, but the police board wouldn’t and that would have cost more money.

“Even if he lost his appeal, it would still cost the police more money.”

Councillor Muir said that the decision was the best course of action to take, because it was unlikely that the forfeiture would have been backed by the Scottish government, which it would have gone before.

Last night critics attacked the decision not to push forward with the action.

Labour Councillor Eric Barry said: “I don’t think anyone should be rewarded for a serious crime like dealing drugs.”

Conservative Councillor Cameron Rose, imself a former police officer, said: “Pensions should be at risk when misconduct is proved.”

A spokesman for Lothian and Borders Police confirmed that the decision had been taken “after appropriate legal advice”.