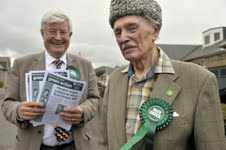 SCOTLAND’S oldest political activist is back out chapping doors on the campaign trail – just a few months shy of his 100th birthday.

Leslie Spoor got his first taste of politics when he was caught up in the Battle of Cable Street in East London in 1936 when the local communities united to take violent action against Oswald Mosley’s British Union of Fascists.

The 99-year-old, who retired in 1975, was the principle founder of the Scottish Ecology Party, which later became the Scottish Green Party.

The former Musselburgh Grammar School history teacher was previously a member of the Labour party and a close friend of the late foreign secretary Robin Cook.

Leslie, also a former Open University lecturer, lives with his wife Pat in the city’s Corstorphine area and still maintains a keen interest in politics and current affairs.

Yesterday he pacing the streets of Edinburgh East and canvassing support for Robin Harper MSP, who is hoping to become the Green Party’s first Westminster MP.

Leslie said: “In a long and active life I have seen political fashions come and go, and when you have such a wide perspective, you realise that what matters is long-term vision.

“I am backing the Greens because they alone have a sense of urgency about the future of the planet.

“I am backing Robin’s campaign in Edinburgh East because he is a refreshing change from the faceless and subservient MPs who fill so many of the Westminster benches.”

Mr Harper became the UK’s first Green member of parliament when he was elected to the Scottish Parliament in 1999.

The 69-year-old, who is still an MSP, welcomed the support and experience of Leslie, and said that he was an inspiration to other activists.

He said: “The challenge of being Scotland’s first Green MP was one I could not resist and Leslie’s long and distinguished career is proof that there is lots of time for a new chapter to be opening.”