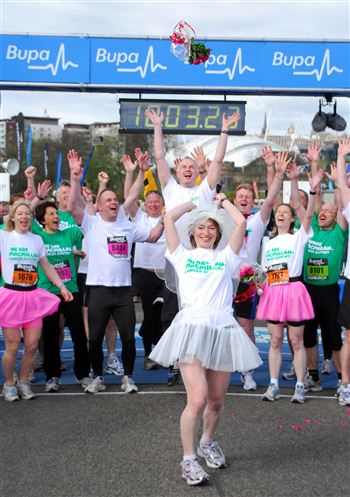 A RUNAWAY bride had a wedding day to remember after taking her groom and 20 guests on a gruelling 10KM run.

They convinced their whole wedding party to join their run to raise money for Macmillan Cancer Support after Anna’s brother-in-law Matthew died of cancer last year.

The happy couple were among over 10,000 runners pounding the streets of Edinburgh today (Sunday).

For the first time ever, The Queen gave permission for the race to pass through the forecourt of the Holyrood Palace at the foot of the Royal Mile.

After crossing the line in Robin’s arms, Anna said: “I’ve loved it so much that I think we should get married every year.

“They say your wedding is supposed to be the best day of your life and I really have loved it today. 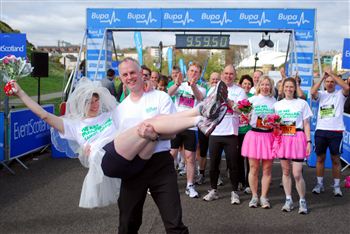 “Everyone cheered us on all the way around the course which really keeps you going.

“My friends all thought I was mad when I suggested it but we’re delighted so many of them came along on the race with us.

“I feel surprisingly great and we’re going to have a great time celebrating later.”

Kenyans won both the men’s and women’s elite races.

First to cross the line in the men’s field was Titus Mbishei, who stormed around the hilly course in 28mins 46secs.

And his female team-mate Florence Kiplagat raced to a win in 32mins 10secs.

Scotland’s biggest hope for the future Freya Murray was the first Brit across the line, coming home in seventh place. 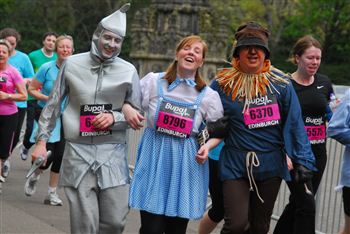 She was disappointed with her run, saying she should have been challenging for a top spot.

Murray said: “It would have been nice to get a better result in my home city.

“I’m pretty disappointed to be honest because I know I am faster than some of the girls who were in front of me.

“I’m planning to spend the start of summer training in Colorado so I’ll be back and I’m focussing on the Commonwealth Games.”